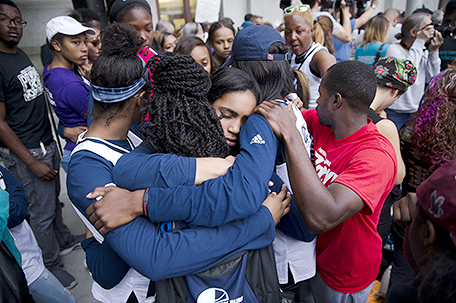 ABOVE PHOTO:  Mourners from West Catholic Preparatory High School embrace during a vigil in memory of the victims of the Orlando, Fla., mass shooting, including their former classmate Akyra Murray, Monday, June 13, 2016, at City Hall in Philadelphia. A gunman opened fire inside a crowded gay nightclub early Sunday, before dying in a gunfight with SWAT officers, police said. (AP Photo/Matt Rourke)

ORLANDO, Fla.— Patience Carter was bleeding on the floor of the bathroom in club Pulse. She recalled looking into the stall next to her, and seeing bloody handprints on the wall and people draped over a toilet. Some were dead, others moaned in agony. She turned her head to see her best friend, lifeless.

Then she heard the voice.

“Where is it?” the man demanded when he heard a ringing cell phone. “Give it up.”

She was safe now — reclining in a hospital chair, a white blanket draped over her lap and legs as she told her story Tuesday to a packed news conference at an Orlando hospital. Her words transported a rapt audience to the horrific moments of early Sunday, when a nightclub turned into a slaughterhouse. 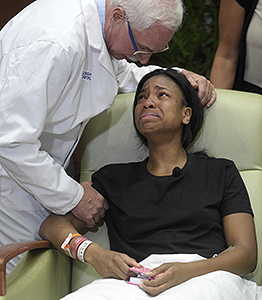 Patience Carter, of Philadelphia, a victim in the Pulse nightclub shooting, is comforted by Dr. Neil Finkler after speaking during a news conference at Florida Hospital Orlando Tuesday, June 14, 2016, in Orlando, Fla. (AP Photo/Phelan M. Ebenhack)

Carter, a 20-year-old Philadelphian, was visiting Florida for the first time, vacationing with her two friends. Her friends’ parents drove them to Pulse that evening after they saw it had five-star reviews on Google. When they walked in, they started chatting with others immediately.

“The sweetest face greeted me,” said Carter. “I told her that her shoes were the cutest I’ve ever seen.”

That woman let Carter be her plus-one, so they could save on the cover charge.

Amanda Alvear, the kind woman with the cute shoes, would not survive the night.

Carter and her friends, Tiara Parker and Akyra Murray, danced and laughed.

“We were just all having the night that we dreamed of,” she said.” It was the most beautiful bonding experience three girls could have on their first night on vacation.”

At 2 a.m., just before the club was about to close, Carter tapped at her phone to order an Uber ride.

“That’s when we started hearing the gunshots,” she said. Maybe, she thought, it was something the DJ was playing to get people to leave. “I was so confused.” 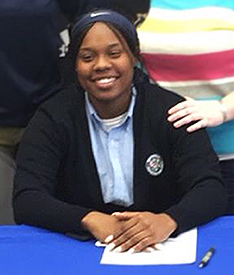 Akyra Murray, 18, recently graduated third in her high school class of 42 students, had scored 1,000 points on the basketball team and had signed a letter of intent to play basketball at Mercyhurst University.

“She was very loving, caring, out to help anybody,” recalled her mother, Natalie Murray.

To celebrate her graduation, Murray, her parents and her 4-year-old sister traveled to Orlando. Murray wanted to party in downtown Orlando, and her parents dropped her off at Pulse at 11:30 p.m.

About 2 a.m., Murray sent a text message, saying that she and her cousins wanted to be picked up and there’d been a shooting. Moments later, the phone rang.

“… (S)he was screaming, saying she was losing a lot of blood,” Natalie Murray said.

She was hiding in a bathroom stall, her arm bleeding for hours with no medical treatment. Akyra Murray told her mother to call police.

She and Murray had separated from Parker and were in the outdoor patio area. Carter insisted on going back inside for her friend.

The shots continued and the trio ran to a bathroom with other panicked clubgoers.

It all seemed so unreal.

“I was even Snapchatting in the bathroom stall,” she said.

And then, the unthinkable: The shooter entered the bathroom and sprayed bullets. Blood was everywhere.

Carter was shot in the leg, and tried to wedge herself into the next stall. She heard the shooter make a phone call to 911. He said he wanted America to stop bombing his country.

“We knew what his motive was. He wasn’t going to stop killing people until he was killed,” she said.

She thought she heard the shooter talk with other co-conspirators. He said he had snipers outside. She could not believe one man could cause all this mayhem.

The gunman walked out and they heard more gunshots. Over the next long minutes, people texted loved ones and tried to call 911 themselves. The man came back into the bathroom and ordered all to silence their phones.

She watched as his feet backed into the stall where she was lying.

Then he shot him.

And another person, and another.

One of those people shielded Carter, sparing her life but losing her own.

Then a SWAT team broke through a concrete wall with a battering ram, busting the water pipes. The shooter and police exchanged gunfire and water flooded the floor.

“If they don’t get to me soon, I’ll die in pile of bloody water,” she recalled thinking.

She managed to pull herself into the other stall and sit up. She’d already been talking to God.

“I really don’t think I’m going to get out of there,” she thought. “I made peace with God. Just please take me, I don’t want any more. I was just begging God to take the soul out my body.”

But then, she was free. A SWAT team member picked her up and dragged her by the arms through the grass.

We can no longer remain silent – terror is terror