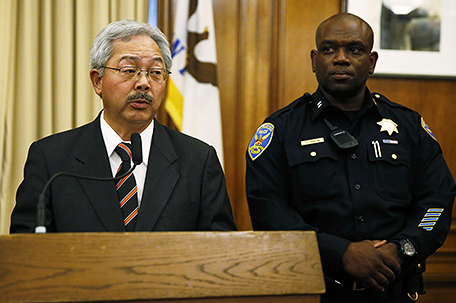 ABOVE PHOTO:  San Francisco Mayor Ed Lee, left, announces the resignation of Chief of Police Greg Suhr while standing beside the new acting Chief Toney Chaplin at City Hall in San Francisco, on Thursday, May 19, 2016. San Francisco’s police chief resigned Thursday at the request of the mayor hours after an officer fatally shot a young black woman driving a stolen car — the culmination of several racially charged incidents in the past year.  (Connor Radnovich/San Francisco Chronicle via AP)

The woman’s shooting death last Thursday was the tipping point for San Francisco Mayor Ed Lee, who forced Police Chief Greg Suhr to step down after months of mounting pressure.

The new chief inherits the daunting task of turning around a troubled department in a city deeply divided by race, and doing it fast.

Chaplin, who is black, is a 26-year veteran of the department. Until last Thursday, he was a deputy chief in charge of implementing Suhr’s reforms. Previously, Chaplin was a lieutenant in charge of homicide investigations.

The 47-year-old Oklahoma native said he intends to carry on with plans to equip officers with body cameras.

“It’s not going to solve everything, but it will give us another look at what’s happening, hopefully from the officer’s perspective,’’ Chaplin said.

He said he will also continue to push for several reforms aimed at cutting down on the number of officer shootings, such as giving suspects armed with knives “time and distance’’ to surrender rather than having officers pull their guns and shoot.

Police Commission President Suzy Loftus said Chaplin “is not going to skip a step’’ in implementing changes because of his position before he was appointed chief.

Chaplin’s appointment is on an interim basis. The commission is in charge of forwarding a short list of three candidates to the mayor.

Chaplin said he isn’t thinking yet about the permanent position.

The mayor appointed him last Thursday, the same day the previous chief stepped down. He already has the support of the NAACP and the police officer’s union.

Chaplin “has the charisma, chemistry and courage to lead this department,’’ said the Rev. Amos Brown, president of the San Francisco chapter of the NAACP.

The mayor said the department is still expected to plow ahead with announced changes.

“I will hold the acting chief and the department to a high standard of urgency,’’ Lee said.

The mayor accepted Suhr’s resignation hours after a young black woman driving a stolen car was fatally shot by a sergeant. The unidentified sergeant and another officer were struggling to pull the woman from the moving car, which had seconds before slammed into a parked utility truck.

It was the third fatal shooting of an unarmed minority suspect since five officers shot to death a young black man carrying a knife in December. That shooting was captured on video and circulated widely online. It appeared to contradict Suhr’s initial assertion that the suspect menaced officers with the knife before they opened fire.

The video and Suhr’s initial statement prompted protests and calls for his resignation. Those calls intensified in April, when police shot and killed a homeless Latino man who was also carrying a knife.

Several days later, transcripts that showed three officers exchanging racist and homophobic text messages were released. It was the second such texting scandal to rock the department since late 2014, when the public learned that eight officers had also exchanged inappropriate messages ridiculing minority suspects and using slurs.

Though those texts were exchanged before Suhr was appointed chief in 2011, he was criticized for failing to discipline the officers quickly enough. A judge overturned Suhr’s attempts to fire the men, ruling that he failed to act within a year of discovering the messages. The officers remain on duty, but the city is appealing the judge’s decision.

Chuck Wexler, head of the Police Executive Research Foundation, a Washington D.C. think tank, said that the previous chief had put the department on the right track in changing its use-of-force policy. Wexler’s organization was helping Suhr develop new policies, and he believes Chaplin will keep seeking improvements.

“There has to be a sense of urgency,’’ Wexler said, “and a recognition that times of changed.’’

One policy change Wexler advocates is barring police from shooting into moving vehicles. New York, Cleveland and several other major cities have adopted that policy. Wexler said police shootings have dropped dramatically because of it.

Currently, San Francisco police can shoot at a moving vehicle if an officer believes the auto is going to kill someone.

Until last Thursday, the mayor remained firmly behind the politically connected Suhr, repeatedly saying he was confident that the chief was making needed reforms. Union head Martin Halloran said Suhr was popular with the rank and file, calling him a “cop’s cop.’’

Halloran said he and the union were disappointed that the mayor had forced Suhr to quit, but that the Police Officers Association supports the new chief.

Chaplin “is an experienced veteran of the SFPD and is more than capable of leading this fine department during this transition,’’ Halloran said.

San Francisco has one of the sharpest disparities in the country between blacks and whites and the level of violence they experience.

In the 10 years that ended in 2014, a black male in San Francisco was 52 times more likely to die in an intentional shooting than a white, non-Hispanic male in the same city, according to mortality data from the Centers for Disease Control and Prevention.

That’s much worse than the disparity nationally during the same period, when black men were 13.5 times more likely to be killed by a firearm assault.