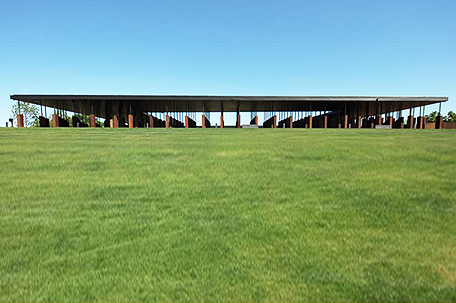 ABOVE PHOTO:  National Memorial for Peace and Justice

MONTGOMERY, ALA. — Visitors to the new National Memorial for Peace and Justice first glimpse them, eerily, in the distance: brown rectangular slabs, 800 in all, inscribed with the names of more than 4,000 souls who lost their lives in lynchings between 1877 and 1950.

Each pillar is 6 feet tall, the height of a person, and made of steel that weathers to different shades of brown. Viewers enter at eye level with the monuments, allowing a view of victims’ names and the date and place of their slaying.

As visitors descend downward on a slanted wooden plank floor, the slabs seemingly rise above them, suspended in the air in long corridors, evoking the image of rows of hanging brown bodies.

The memorial and an accompanying museum that open this week in Montgomery are a project of the nonprofit Equal Justice Initiative, a legal advocacy group in Montgomery. The organization says the two sites will be the nation’s first “comprehensive memorial dedicated to racial terror lynchings of African Americans and the legacy of slavery and racial inequality in America.”

There is one column for each of the 800 U.S. counties where researchers uncovered lynchings. Most of the roughly 4,400 killings happened in the South, but states coast-to-coast are represented.

Bryan Stevenson, founder of the Equal Justice Initiative, said he wanted to create a space for people to confront and “deal honestly with this history,” just as South Africa has sites about apartheid and Germany memorializes victims of the Holocaust.

“For me, this was a response to the silence I have seen throughout my life. We’ve got 59 markers and monuments to the Confederacy in Montgomery. We have a lot of people who spend a lot of time talking about mid-19th century history, but they don’t ever talk about slavery.”

The memorial opens the same week that Alabama marks Confederate Memorial Day, an official state holiday in which state offices were closed.

The first installation visitors see up close comprises statues of six slaves with chains around their necks, lash marks on their backs. A mother, face twisted in horror, cradles an infant in one arm and stretches out her other hand reaching for something, or someone, outside her grasp.

Beyond the sculptures are monuments to those who lost their lives to “racial terror” lynchings after the Civil War. A section of epitaphs give the brief story behind some the names:

— “Fred Rochelle, 16, was burned alive in a public spectacle lynching before thousands in Polk County, Florida, in 1901.”

— “David Walker, his wife and their four children were lynched in Hickman, Kentucky, in 1908 after Mr. Walker was accused of using inappropriate language with a White woman.” 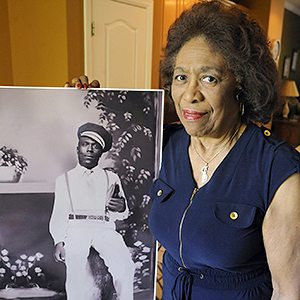 In this Wednesday, April 18, 2018 photo, Josephine Bolling McCall poses with a photo of her father, lynching victim Elmore Bolling, at her home in Montgomery, Ala. Bolling is among thousands of lynching victims remembered at the new National Memorial for Peace and Justice, erected with donations by the Alabama-based Equal Justice Initiative. The memorial and an accompanying museum, which aim to tell the story of racial oppression in the United States, open April 26. (AP Photo/Jay Reeves)

Some descendants of victims say they hope to make the trip to Alabama to see the memorial.

Caldwell Washington, 23, was found hanging from a tree in 1933 in what authorities in Taylor, Texas, first called a suicide. But family members and supporters say the finding overlooked a key fact: his hands were tied behind his back.

Washington’s granddaughter, Johnnye Patterson, said the family was gratified to learn that Washington’s name is included on the memorial as a lynching victim. That’s particularly true for Patterson’s mother, Johnnye Mae Washington Patterson, who was Washington’s daughter and has lived with a lifetime of pain.

“They didn’t ever believe he committed suicide. It didn’t make sense that you find someone hanging in a tree with his hands tied behind him,” Johnnye Patterson said.

The museum accompanying the memorial is called “Legacy Museum: From Enslavement to Mass Incarceration.” It is located on the site of a former slave depot in downtown Montgomery, and seeks to explore slavery’s legacy.

“You are standing on a site where people were warehoused,” announces a statement written on the first wall visitors see as they enter.

Down a dark hallway, images of talking slaves are projected on walls behind cell bars. The first is of a woman who is pleading for the children who were taken away from her.

The museum explores the eras of enslavement, lynching, Jim Crow and modern criminal justice issues that are the focus of the Equal Justice Initiative’s legal work. Several of the organization’s clients are featured, including Ray Hinton, a man whose conviction was overturned after 30 years on Alabama’s death row.

Stevenson, who works with death row inmates, has had judges presume he is a defendant when he sits at the defense table. He doesn’t believe that slavery disappeared but “evolved.” He said what he means by that is the myth of White supremacy that was created to justify slavery didn’t disappear in 1865.

“This is a long-festering, long-simmering malady that is not going to go away on its own. We are going to have to treat it. I believe truth-telling and a way to confront this history is the way that treatment has to begin,” Stevenson said.

Face the truth about lynchings to move our country forward