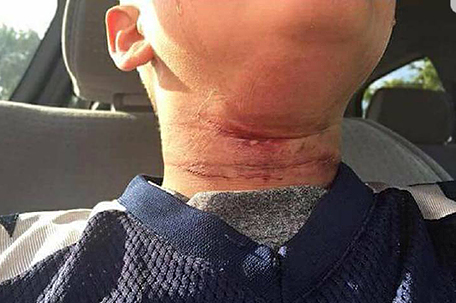 ABOVE PHOTO:  An 8-year-old Claremont, N.H., resident suffered rope burns after an Aug. 28, 2017, incident involving teenagers. The incident is under investigation.  (Courtesy photograph)

Relatives and community activists are demanding that police release more details about the assault.

According to the news outlet, the child was attacked by a group of White teenagers behind a home near Barnes Park in August. The group of teens allegedly put a rope around his neck and shoved him off of a picnic table while yelling racial slurs.

Police officials reportedly launched an ongoing probe surrounding the attack, but they have refrained from releasing any specifics about the case because of confidentiality in juvenile proceedings, the news outlet said. However, several social justice activists in the Claremont community believe that withholding details prevents a crucial discussion about race relations from happening.

“Folks don’t just deserve to be informed about what’s going on; it is imperative that we disseminate this information,” said Mark Hughes, the co-founder and executive director for Justice for All, a Vermont-based group for racial justice. “Because to not do this feeds into the problem.”

Hughes noted that while the incident occurred on Aug. 28, it took more than a week for it to become public, and that was only because of a widely shared Facebook post by the boy’s mother.

Valley News reported that the incident wasn’t made public until two weeks after it happened. “I am upset and saddened and angered about how the police and city officials have chosen to play this,” Kendra Colburn of Showing Up for Racial Justice told the news outlet. “(They) all seem like they do not want media attention on this story, and I am concerned about that. I am really concerned that we can’t change what we don’t know about or refuse to look at.”

Although the police department hasn’t directly commented on the case, Claremont Police Chief Mark Chase said he believes “mistakes” made by juveniles “should not have to follow them for the rest of their life,” the news outlet reported.

The child has reportedly returned to school, as the police continue their investigation.

According to the Valley News, a 2010 Census showed that 96 percent of Claremont’s population was White, 0.6 percent was Black, and 1.8 percent was mixed race.