National Guard called in to keep the peace in Baltimore 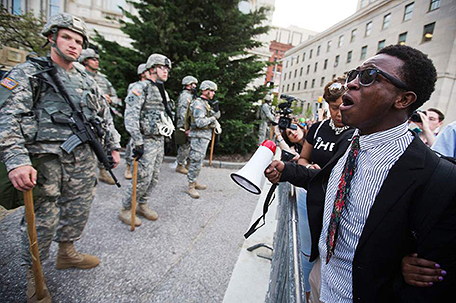 May 1, 2015 Category: Week In Review Posted by: Philadelphia Sun Staff

ABOVE PHOTO:  Jody Christopher, of Baltimore, shouts at National Guardsmen brought in to stand guard outside City Hall as protestors demonstrate against the police-custody death of Freddie Gray, Wednesday, April 29, 2015, in Baltimore.  (AP Photo/David Goldman)

BALTIMORE — National Guardsmen took up positions across the city and hundreds of volunteers began sweeping the streets of broken glass and other debris Tuesday, the morning after riots erupted following the funeral of a black man who died in police custody.

The streets were calm in the morning, but authorities remained on edge against the possibility of another outbreak of looting and arson.

The city was under a 10 PM-to-5 AM curfew, all public schools were closed, and the Baltimore Orioles canceled their Tuesday night game at Camden Yards. National Guardsmen in helmets with face shields surrounded City Hall, standing behind bicycle-rack barriers.

“We’re not going to have another repeat of what happened last night,” Maryland Gov. Larry Hogan vowed after a visit to a West Baltimore neighborhood where cars were burned and windows smashed. “We’re going to make sure we get Baltimore back on track.”

Hogan said there are “a couple of thousand” National Guardsmen and police officers in Baltimore, with more on the way.

It was the first time the National Guard was called out to quell unrest in Baltimore since 1968, when some of the same neighborhoods burned for days after the assassination of the Rev. Dr. Martin Luther King Jr.

At the White House, President Barack Obama called the deaths of several black men around the country at the hands of police “a slow rolling crisis.” But he added that there was “no excuse” for the violence in Baltimore, and said the riots should be treated as criminals.

As firefighters doused smoldering fires, political leaders and residents called the violence a tragedy for the city and lamented the damage done by the rioters to their own neighborhoods.

Hundreds of volunteers helped shopkeepers clean up as helmeted officers blocked a stretch of North Avenue in the neighborhood where Freddie Gray, 25, was arrested earlier in this month in a case that has become the latest flashpoint in the national debate over the police use of deadly force against black men.

Hardware stores donated trash bags and brooms, and city workers brought in trucks to haul away mounds of trash and broken glass.

With schools closed, Blanca Tapahuasco brought her three sons, ages 2 to 8, from another part of the city to help sweep the brick-and-pavement courtyard outside a looted CVS pharmacy.

“We’re helping the neighborhood build back up,” she said. “This is an encouragement to them to know the rest of the city is not just looking on and wondering what to do.”

CVS store manager Haywood McMorris said the destruction didn’t make sense: “We work here, man. This is where we stand, and this is where people actually make a living.”

The rioting started in West Baltimore on Monday afternoon — within a mile of where Gray was arrested — and by midnight had spread to East Baltimore and neighborhoods close to downtown and near the baseball stadium.

The rioters set police cars and buildings on fire, looted a mall and liquor stores and hurled rocks, bottles and cinderblocks at police in riot gear. Police responded occasionally with pepper spray or cleared the streets by moving in tight formation, shoulder to shoulder.

At least 15 officers were hurt, including six who were hospitalized, police said. There were 144 vehicle fires, 15 structure fires and nearly 200 arrests, the mayor’s office said.

“They just outnumbered us and outflanked us,” Baltimore Police Commissioner Anthony Batts said. “We needed to have more resources out there.”

The governor had no immediate estimate of the damage.

The rioting was the worst such violence in the U.S. since the turbulent protests that broke out over the death of Michael Brown, the unarmed black 18-year-old who was shot by a white police officer in Ferguson, Missouri, last summer.

“I understand anger, but what we’re seeing isn’t anger,” Baltimore Mayor Stephanie Rawlings-Blake lamented. “It’s disruption of a community. The same community they say they care about, they’re destroying. You can’t have it both ways.”

State and local authorities found themselves responding to questions about whether their initial response had been adequate.

Rawlings-Blake waited hours to ask the governor to declare a state of emergency, and the governor hinted she should have come to him earlier.

“We were all in the command center in the second floor of the state House in constant communication, and we were trying to get in touch with the mayor for quite some time,” Hogan said at a Monday evening news conference. “She finally made that call, and we immediately took action.”

Asked if the mayor should have called for help sooner, however, Hogan replied that he didn’t want to question what Baltimore officials were doing: “They’re all under tremendous stress. We’re all on one team.”

Rawlings-Blake said officials initially thought they had gotten the unrest under control.

Maryland National Guard spokesman Lt. Charles Kohler said that about 2,000 members would be deployed through the day and that the force could build to 5,000.

Also, State Police said they were putting out a call for up to 500 additional law enforcement officers from Maryland and as many as 5,000 from around the mid-Atlantic region.

Attorney General Loretta Lynch, in her first day on the job Monday, said she will send Justice Department officials to the city in the coming days. And the governor said he is temporarily moving his office from Annapolis to Baltimore.

Gray was arrested April 12 after running away at the sight of police, authorities said. He was held down, handcuffed and loaded into a police van. Leg cuffs were put on him when he became irate inside. He died of a spinal cord injury a week later.

Authorities said they are still investigating how and when he suffered the injury — during the arrest or while he was in the van, where authorities say he was riding without being belted in, a violation of department policy. Six officers have been suspended with pay while the investigation continues.

While they are angry about what happened to Gray, his family said riots are not the answer.

“I think the violence is wrong,” Gray’s twin sister, Fredericka Gray, said late Monday. “I don’t like it at all.”

In 1968, when Baltimore and many other U.S. cities erupted in flames over the assassination of King, the state of Maryland called up 6,000 Guardsmen to restore order in the city, and 2,000 active-duty federal troops were sent in, too.

Standing in front of the burned-out CVS drugstore Tuesday, the mayor lamented that the neighborhood was still recovering from the riots of the 1960s.

“We worked so hard to get a company like CVS to invest in this neighborhood,” she said. “This is the only place that so many people have to pick up their prescriptions.”