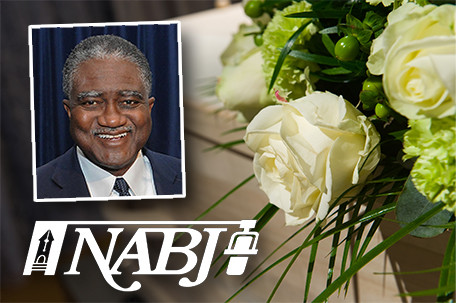 “I am heartbroken to learn that Mr. George Curry has passed. He has been a beacon for so many and a pivotal voice among black publishers. His strength and pursuit for the truth will carry on in the lives he touched,” said NABJ President Sarah Glover. “I had the chance to talk with him recently at the Democratic National Convention. His 5,000 watt smile stays etched in my mind. On behalf of the entire NABJ family, our thoughts and prayers are with his family and loved ones.”

Curry was passionate about developing the next generation of Black journalists, regularly lent his support to NABJ programming and was an invaluable asset to the success of this year’s NABJ Region I conference at Morgan State University in Baltimore.

“My friendship with George spanned 40 years. He was a race man and gumshoe journalist in the tradition of Vernon Jarrett and Mal Goode. For a decade we were panelists on ‘Lead Story,’ BET’s old Sunday morning news talk show,” said NABJ Founder DeWayne Wickham, also dean of Morgan’s School of Global Journalism and Communication. “But George’s most important contribution to our craft was the courageous work he did as editor of “Emerge magazine,” a news magazine that had no  equal  in applauding the successes, and condemning the enemies, of people of African descent.”

In 1966, Curry moved to New York, where he worked for the Student Nonviolent Coordinating Committee (SNCC) for a year. Curry earned his Bachelor of Arts degree in History from Knoxville College in 1970. Fulfilling a lifelong dream, Curry began his professional journalism career as a reporter for Sports Illustrated magazine in 1970; he was the second African American hired by the publication.

After leaving “Sports Illustrated” in 1972, Curry headed west and worked as a beat reporter for The “St. Louis Post-Dispatch” until 1983. From 1983 until 1989, Curry worked for the Chicago Tribune as a Washington correspondent, covering political stories such as Jesse Jackson’s 1984 presidential campaign. From 1989 until 1993, Curry worked as the New York bureau chief of the Tribune. From there, Curry served as editor-in-chief of “Emerge magazine, until it folded and printed its final edition in 2003. Under his leadership, the magazine won more than forty national journalism awards.

Curry was in the process of reviving Emerge as an online publication at the time of his death.

“He was still fighting to revive that magazine until his last moment on earth,” said TV- ONE host Roland S. Martin, a friend, colleague and fellow columnist. “George Curry died with his boots on, still fighting.”

According to “Journal- isms,” Emerge was best known for its cover stories on Supreme Court Justice Clarence Thomas, one showing the justice sporting an Aunt Jemima knot and the second depicting him as a lawn jockey for the far right. Curry wrote that the covers “were effective because in the minds of many Blacks disgusted with Thomas’ voting record, that’s exactly what he is. And we had the temerity to say it.” Emerge aimed to be the political-magazine counterpart to EBONY, Jet, Essence and Black Enterprise.

In 2003, Curry became editor-in-chief for the National Newspaper Publishers Association News Service, or NNPA, and BlackPressUSA.com; his weekly syndicated column appeared in more than two hundred African American newspapers. While at NNPA, Curry covered a barrage of issues, such as the Supreme Court’s decision on the University of Michigan’s affirmative action case and the Iraq War.

In 2003, Curry was named the NABJ Journalist of the Year for his work with the Black Press.

“George has made so many contributions to journalism – from the high school journalism workshops to his passionate fight for the black press. There’s a generation of journalists – including me – who are grateful to have had the chance to know him,” said Neil Foote, a friend of Curry’s and president of the National Black Public Relations Society.

Funeral arrangements will be held on Friday and Saturday in Tuscaloosa, Ala., Curry’s hometown.