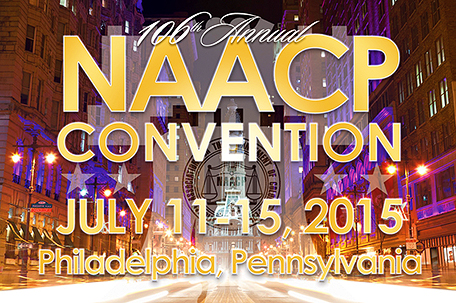 BALTIMORE, MD– From July 11th to the 15th, the NAACP will host its 106th Annual Convention in Philadelphia, PA.  This year’s convention theme is “Pursuing Liberty In the Face of Injustice.” In the wake of the social and economic unrest across the country, the NAACP will focus on building a broad based agenda around voting rights, criminal justice reform, health equity, economic opportunity and education equality ahead of the 2016 presidential election.

“Under the banner of ‘Pursuing Liberty In the Face of Injustice,’ the NAACP looks forward to convening thousands of civil rights, human rights and social justice activists to network and develop measurable strategies that inspire courage in participants to implement sustainable political and economic changes in vulnerable neighborhoods throughout the country” said NAACP Board Chairman Roslyn M. Brock.

This convention occurs a few weeks ahead of the kick off of the NAACP’s America Journey for Justice – a series of direct actions that will take place along the 850 mile route from Selma, Alabama to Washington, DC–through Georgia, South Carolina, North Carolina and Virginia to highlight vulnerable communities subject to regressive voting rights tactics.

“Our lives, our votes, our jobs and our schools matter,” said Cornell William Brooks, NAACP President & CEO. “I look forward to meeting with citizen leaders in Philadelphia, the birthplace of American liberty, who share these values and our unyielding commitment to protecting the lives of Americans, the sustainable jobs of our citizenry, our right to vote and the integrity of our democracy. As we head into the 2016 election, we must secure unfettered access to the ballot box for every American. The ballot box is our most powerful way to raise our voice.  Join us in Philly as we work together to find the solutions, strategies and inspiration for what yet ails our nation.”

This year’s convention speakers include well-known as well as the next generation of civil rights leaders, elected officials, faith leaders, actors and community activists.

“We are honored to welcome the NAACP to Philadelphia this July for its 106th National Convention,” said Mayor Michael Nutter.  “As the birthplace of liberty, our city is the perfect location to host the NAACP, one of the leading organizations for social change in the world for more than a century.  We are thrilled that some of the most pressing social, economic and civil rights issues of the 21st century will be addressed at this convention here in Philadelphia.”

“The NAACP continues to be on the frontlines in the fight for social justice,” stated NAACP Vice Chairman Leon Russell. “Civic engagement and turning out the vote must be at the forefront of our work as we move into this presidential election year. We could not have picked a better place to reaffirm voting as the bedrock of our democracy than Philadelphia. We thank Pennsylvania State Conference President Dwayne Jackson Sr. for marshaling the support of all of our units in Pennsylvania for the success of this convention. We are particularly grateful to the Philadelphia Branch of the NAACP for working with us to help ensure the success of this 106th Annual Convention. We will continue to lead the charge for liberty in the face of injustice, just as we have done since our founding.”

“The Pennsylvania State Conference looks forward to hosting the NAACP’s 106th National Annual Convention in the Commonwealth of Pennsylvania,” said Dwayne Jackson Sr., president of the NAACP Pennsylvania State Conference. “Our expectations and excitement are high as we prepare for civil and human rights advocates to visit our great state. The NAACP is moving forward more energized than ever and this convention will ensure attendees leave with a renewed commitment to being champions for human and civil rights.”

“The Philadelphia Branch of the NAACP was founded in 1912, and for more than a century, our branch has been fighting to protect the civil and human rights of every Philadelphia resident, especially those in communities of color,” said Rodney Muhammad, president of the NAACP Philadelphia Branch. “Our hope is that this 106th annual national convention will cause the entire Association to attack the social ills of poverty, racial profiling, police brutality, health disparities and income inequality, with more vigor than ever before.”

In addition to the primary convention schedule, the NAACP’s Youth & College Division will host workshops, luncheons and forums throughout the week. Emerging youth from across the nation will be featured in the annual Academic, Cultural, Technological and Scientific Olympics (ACT-SO) competition beginning July 8. Students will compete in 26 categories including sciences, humanities, performing arts, visual arts, and business over the course of the event. Celebrity hosts will be serving as guest judges throughout the competition and hosting the closing awards ceremony.