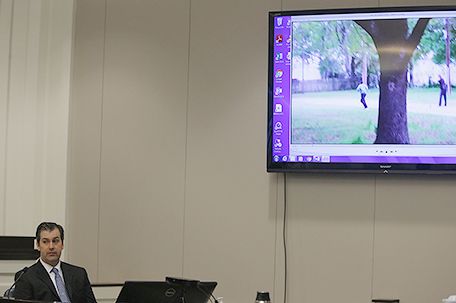 ABOVE PHOTO:  Former North Charleston police officer Michael Slager, looks away from a video monitor during his murder trial at the Charleston County court in Charleston, S.C., Tuesday, Nov. 29,2 016. Slater is testifying in his own defense. (Grace Beahm/Post and Courier via AP, Pool)

BALTIMORE – The following is a statement from Cornell William Brooks, President, and CEO of the NAACP:

“The NAACP is deeply frustrated that the trial of Michael Slager, the former North Charleston police officer who fatally shot Walter Scott, an unarmed Black man, after a routine traffic stop in 2015 has ended in a mistrial. Despite cell phone video evidence depicting Slager shooting Scott multiple times from more than 15 feet away and debunking Slager’s claims that Scott had taken hold of his Taser gun, a jury was unable to reach a unanimous decision after four days of deliberation.

Scott, a forklift operator who served in U.S. Coast Guard, lived a life worth far more than a hashtag or statistic, but the story of his death and the result of the ensuing trial are tragically representative of the epidemic of racial profiling in America. As discussed in the NAACP’s “Born Suspect Report,” the seven states that keep comprehensive traffic stop data, police stop, ticket and search Black drivers in disproportionately large numbers across the board. And of the 991 citizens, including Scott, who were fatally shot by police in 2015, at least 43 percent of them were Black or Hispanic. Of the 94 unarmed victims, 40.4 percent were black.

All too often, the perpetrators go unpunished: earlier in the month, a Ohio judge declared a mistrial in the fatal shooting of Samuel DuBose, and, just last week, Mecklenburg County District Attorney Andrew Murray announced that the police officer who fatally shot Keith Lamont Scott would not be charged.

Slager still faces separate federal civil rights charges and the City of North Charleston has already approved a $6.5 million civil settlement with Scott’s family, but the jury’s decision is a disappointing delay in the delivery of justice.

Despite this setback, the NAACP will continue to advocate for a just and decisive conclusion to Slager’s case and fight for substantive, comprehensive criminal justice reform.”