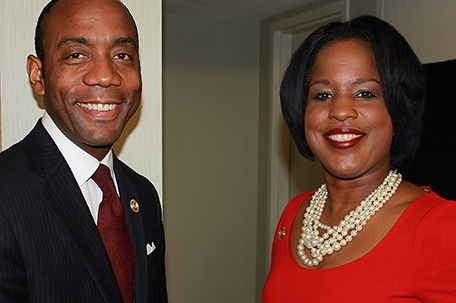 May 24, 2014 Category: Week In Review Posted by: Philadelphia Sun Staff

WASHINGTON — As a Head Start and Yale Law School graduate, Cornell William Brooks calls himself a direct beneficiary of Brown v. Board of Education.

Now the lawyer and activist is taking over as the next national president and CEO of the NAACP, whose legal arm brought that landmark legal case challenging segregation in public schools.

The NAACP’s board made the final decision Friday night, and chair Roslyn Brock told The Associated Press about Brooks’ new position on Saturday morning.

Brooks will be formally presented to the Baltimore-based organization’s members at its national convention in Las Vegas in July.

“I am a beneficiary, an heir and a grandson, if you will, of Brown versus Board of Education,” Brooks told the AP.

“My life is the direct product, if you will, of the legacy of the blood, sweat and tears of the NAACP and so today I’m particularly mindful that the NAACP has made America what it is, and certainly made my life possible and we are all grateful heirs of that legacy.”

“I am deeply humbled and honored to be entrusted with the opportunity to lead this powerful historic organization,” Brooks said in an interview. “In our fight to ensure voting rights, economic equality, health equity, and ending racial discrimination for all people, there is indeed much work to be done.”

Brooks, a minister, is originally from Georgetown, South Carolina. He currently is president and CEO of the New Jersey Institute for Social Justice, a Newark, New Jersey-based urban research and advocacy organization.

He graduated from Jackson State University, received a Master of Divinity from Boston University School of Theology and got his law degree from Yale.

Brooks has worked as a lawyer for the Federal Communication Commission and the Justice Department. He also ran for Congress as a Democrat in Virginia in 1998. He still owns a home in Woodbridge, Virginia.

“Mr. Brooks is a pioneering lawyer and civil rights leader who brings a wealth of knowledge and experience to the association,” Brock said. “We look forward to leveraging his legal prowess, vision and leadership as we tackle the pressing civil rights issues of the 21st century.”

Brooks said he would start talking to and listening to the NAACP’s membership to plan for the organization’s future.

He said he would present his vision for the NAACP at the organization’s convention after he’s held conversations with the members.

“As long as America continues to be a great, but imperfect nation, there will be a need for the NAACP,” Brooks said.

Jealous called Brooks’ selection “the beginning of a new and exciting chapter for the NAACP.”