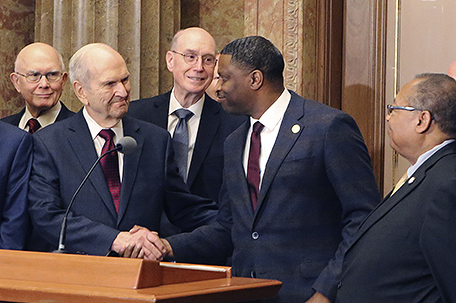 ABOVE PHOTO:  Mormon church President Russell M. Nelson shakes hands with Derrick Johnson, president of the NAACP during a news conference Thursday, May 17, 2018, in Salt Lake City. Top leaders from the NAACP and Mormon church are calling for greater racial harmony and mutual respect following the first official meeting between national leaders from the civil rights organization and Utah-based religion. Johnson said the alliance should serve as an example for others to work in harmony and with greater civility as he read from read prepared remarks during a media event in Salt Lake City Thursday. Nelson called for greater racial and ethnic harmony. (AP Photo/Rick Bowmer)

The media event in Salt Lake City came ahead of a 40th anniversary celebration planned next month by The Church of Jesus Christ of Latter-day Saints of its 1978 decision to lift a ban on Blacks in the religion’s lay priesthood. The ban was rooted in the belief that Black skin was a curse, and it lingers as one of the most sensitive topics in the religion’s history.

They instead focused on highlighting the historic nature of the two institutions creating an alliance they hope can lead to work on education and humanitarian causes.

Johnson said the newly-minted alliance should be an example for others to work in harmony and with greater civility. Nelson echoed that, calling for everyone in the world to show greater “racial and ethnic harmony’’ and eliminate prejudice of all kinds.

It’s not exaggerating to call the meeting historic because the two organizations have in the past existed in different worlds and had different trajectories, W. Paul Reeve said, the Simmons Professor of Mormon Studies at the University of Utah. The joint statement and meeting marks another marker on the Mormon church’s trajectory to being more willing to speak out forcefully against racism and white supremacy, he said.

“This is an indication they are willing to engage in racial justice for the future,’’ Reeve said.

Nelson didn’t take questions from the media following his remarks. Johnson and other NAACP officials did take questions and were asked about the past Mormon ban on blacks in the priesthood.

Johnson said evolving organizations must be better at addressing today’s needs. Leon W. Russell, chairman of the NAACP board of directors, spoke more directly about the ban and applauded the Mormon church’s decision to celebrate the anniversary during a June 1 event in Salt Lake City with music planned.

“Any religious domination in the United States at some point had a history that included discrimination and repression of Africans in America so the recognition by this church that it needed to evolve needs to be celebrated,’’ Russell said.

In 2013, the Mormon church posted an essay disavowing the ban and the reasons behind it, saying it was put into place during an era of great racial divide that influenced early teachings of the church.

The 2,000-word piece was the most comprehensive explanation of why the religion had previously had barred men of African descent from the lay clergy and was lauded by many as an important step in the religion’s history. Others, though, wished it had gone further and included a formal apology.

An apology didn’t happen Thursday, despite a fake news release posted on a website, made to look strikingly similar to the Mormon church’s newsroom website, that included a made up apology from Nelson. Church officials declined to comment on the fabricated post that briefly got traction on social media.

The religion’s decision not to speak about the ban on Thursday isn’t surprising, Reeve said. The religion prefers not to deal with its racial history before the ban was lifted, instead trying to turn the focus on what it is doing today to improve things.

The Utah-based religion doesn’t provide ethnic or racial breakdowns of its members, but scholars say Blacks make up a small portion of the 16-million member global faith.

Among the 6.6 million Mormons in the U.S., Blacks account for about 3 percent of members, according to the Pew Research Center and independent Mormon researcher Matt Martinich.

Russell, of the NAACP, said that there hasn’t been bad blood between his organization and the Mormon church, but rather a lack of any connection.

“This gives an opportunity to build a relationship and to start a dialogue,’’ Russell said.