N. Korea missile fears in Japan: ‘Whatever will be, will be’ 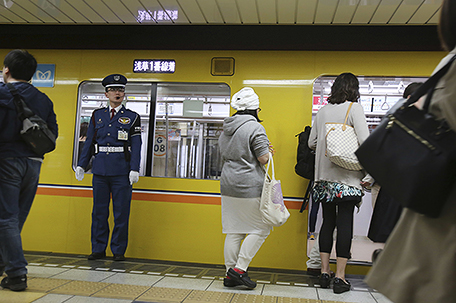 ABOVE PHOTO:  People get on the subway in Tokyo, Saturday, April 29, 2017. A North Korean mid-range ballistic missile apparently failed shortly after launch Saturday, South Korea and the United States said, the third test-fire flop just this month but a clear message of defiance as a U.S. supercarrier conducts drills in nearby waters. One of Tokyo’s major subways systems says it shut down all lines for 10 minutes early Saturday after receiving warning of the North Korean missile launch. (AP Photo/Koji Sasahara)

FUSSA, Japan — Residents living near U.S. military bases in Japan are facing a fresh reality: Their neighborhoods are on the front-line of North Korea’s dispute with America and if Pyongyang were to attack they would have just minutes to shelter from incoming missiles.

“It’s impossible. There is no way we can run away from it,” said Seijiro Kurosawa, a 58-year-old taxi driver in Fussa, near Yokota Air Base. “We don’t have bunkers, shelters or anything like that.”

His company recently instructed drivers to park their cabs and take immediate refuge in the event of an attack, but he isn’t sure where he could go. “All we can do is run into a department store perhaps,” he said.

A possible missile strike and what to do about it have dominated TV talk shows and other media in Japan in recent weeks as regional tension has spiked, with the North Korean regime continuing to test-fire rockets and President Donald Trump sending an aircraft carrier to nearby waters in a show of force.

North Korea has yet to meet its goal of developing a nuclear-tipped missile that can reach the U.S. mainland, but analysts believe its current arsenal is capable of striking the 50,000 U.S. troops stationed across Japan. The government raised caution levels in March after Pyongyang said four ballistic missiles that landed a few hundred kilometers (miles) off Japan’s coast were meant to simulate a nuclear strike on U.S. bases there.

While Japanese tabloids and television programs have reported on nuclear shelters ordered by a handful of rich people or touted gas masks as a more affordable option, it’s largely business as usual in Fussa, a town of 58,000 people in Tokyo’s western suburbs.

“Whatever will be, will be,” said 34-year-old Jumpei Takemiya, who runs a shoe repair shop across from Yokota Air Base. “Just think calmly about it. Is Yokota really going to be the first one to be hit? I doubt it, and frankly I’m not so nervous,” he said.

Looking out his shop window, he added: “As you can see, there is no heightened security or any other unusual development around here.”

For 75-year-old Yoshio Takagi, the talk of North Korean missiles brings back memories of World War II, when he had to temporarily relocate to a rural village to avoid American bombs falling in and around Tokyo that killed his two older brothers. He remains opposed to the use of weapons, but is also realistic about current circumstances.

“Tension has escalated and the situation has become more unpredictable under Trump,” he said. “But Japan relies on the U.S. military and there is a base here. I think we just have to accept the consequences.”

Visits to a government crisis management website surged to the millions in April from a previous record of tens of thousands in March, as the government tweeted and put out fresh instructions for what to do in the event of a missile attack.

The instructions are simple: If you are outdoors, take refuge in strong buildings or underground shopping arcades and if no such facilities are nearby, drop to the ground and cover your head. A chemical weapon is possible, so the instructions advise covering your nose and mouth with a cloth and shutting doors and windows.

A first-ever missile attack drill was held in March in Akita prefecture in northern Japan, and the government recently instructed all 47 prefectures to draw up plans quickly for similar drills. So far, only two others – Yamagata in the north and Nagasaki, home to Sasebo naval base, in the south – have started to make concrete plans for drills in the coming months.

“We need to plan carefully in order to raise awareness, not to scare off the public,” said Keiko Nakajima, a Tokyo crisis response official.

Some think the risk is overblown.

North Korea is “mostly bluffing its military capability, and the missile scare is further hyped up largely by TV,” said Hiroki Fujii, a 40-year-old utility employee who lives near Yokota.

Akinori Otani worries more about a U.S. military plane crashing in the area. At bases around Japan, residents have raised concern about the safety of the tilt-rotor MV-22 “Osprey” aircraft.

“Ospreys are actually flying around,” said Otani, a 42-year-old resident of Hamura, another town near Yokota. “I’m more concerned about them than a missile that I think is unlikely to hit us.”

In the southwestern town of Iwakuni, home to a U.S. Marine Corps air station, residents began asking about attack response plans after the area was mentioned on TV among possible targets, said Yuji Yamaguchi, an emergency response official there.

He questioned whether it is possible to predict a missile’s course and issue an alert before it reaches Japan and said that without such information, drawing up an evacuation scenario is difficult. It is believed that it would take about 10 minutes for a North Korean missile to reach Japan, yet when the four missiles landed off the coast in March, it wasn’t until 20 minutes after that the government notified local fishermen.

For Reiko Naya, who runs a gift shop just outside the Yokota base, she is concerned that the tension may be used by the government as a justification to bolster Japan’s military capability.

“Japan has renounced war, but it seems we are gradually getting embroiled into a conflict,” she said. “We thought North Korean missiles would never reach Japan, but after all these tests, they now seem routine. Eventually, one of them might come flying.”

Helping the people of Japan in the face of tragedy