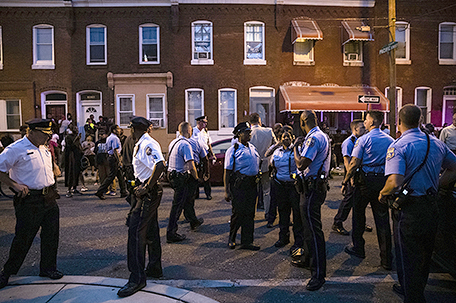 ABOVE PHOTO: Officers gather for crowd control near a massive police presence set up outside a house as they investigate an active shooting situation, in Philadelphia, Wednesday, Aug. 14, 2019. (AP Photo/Matt Rourke)

Authorities say more charges are likely to be filed in the case of a Philadelphia man accused of barricading himself inside a city row house and shooting six police officers during an hours long standoff last week.

But Philadelphia District Attorney Larry Krasner also warned Monday that the investigation into the “factually complicated case” could take months to complete due to the extensive amount of evidence that must be reviewed.

The alleged shooter, 36-year-old Maurice Hill, is charged with attempted murder and assault.

He’s accused of shooting at officers who were serving a drug warrant Wednesday, then keeping police at bay while he fired repeatedly from inside a building.

The six officers were released after being treated at hospitals..

Four other men are charged with drug offenses in connection with the standoff.

Shootout at Tioga : Six police shot in standoff that ‘could have been far worse’