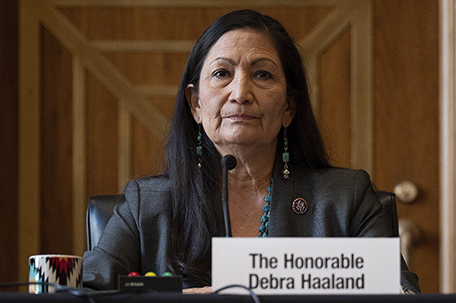 ABOVE PHOTO: Rep. Deb Haaland, D-N.M., listens during the Senate Committee on Energy and Natural Resources hearing on her nomination to be Interior secretary, on Capitol Hill in Washington. Some Republican senators labeled Haaland “radical” over her calls to reduce dependence on fossil fuels and address climate change, and said that could hurt rural America and major oil and gas-producing states. The label of Haaland as a “radical” by Republican lawmakers is getting pushback from Native Americans. (Jim Watson/Pool Photo via AP, File)

Citizens of tribes across the U.S. cried and clapped in celebration Monday as Deb Haaland became the first Native American confirmed as secretary of a Cabinet agency.

The U.S. Senate voted 51-40 in favor of the Democrat’s nomination to lead the Interior Department amid a groundswell of support from tribal members.

Many Native Americans have called Haaland’s historic confirmation an answer to their prayers and a long time coming, putting someone they trust in a position to carry forward their hopes and expectations.

The Interior Department has broad oversight of tribal affairs and energy development.

Haaland, of Laguna Pueblo in New Mexico, will resign as a U.S. representative to take the post.

Here are reactions from Indian Country:

“It’s a huge opportunity for Indian Country to have someone that’s clearly going to be supportive of those things that can improve the lives of Native people.”

Fawn Sharp, president of the National Congress of American Indians and the Quinault Indian Nation of Washington.

“The nation needs her leadership and vision to help lead our response to climate change, to steward our lands and cultural resources and to ensure that across the federal government, the United States lives up to its trust and treaty obligations to tribal nations and

“However you do your meditation, pray for Deb. She is going to have the biggest challenges of her life coming forward, and we want to stand with her and beside her to support her. She’s going to have some of those days where she’s going to wonder, ‘how did I get myself into this?’ But she’s called by the ancestors … offer up those prayers as you’re praying for your family, your friends, pray for Deb. Pray for all of our women leaders who are out there serving us in a variety of capacities. For that, we are so thankful. This is a day of gratitude.”

“From a tribal perspective, hopefully when she gets into office, she can roll back some restraints on tribal economic development. Trust lands are super regulated, and it’s all federal land. If tribal economies can improve, hopefully that will lead to more funding for schools, tribal police, things like that.”

Jonathan Nez, president of the Navajo Nation in Arizona, New Mexico and Utah.

“This is an unprecedented and monumental day for all first people of this country. Words cannot express how overjoyed and proud we are to see one of our own confirmed to serve in this high-level position. It’s a wonderful feeling that we can now refer to her as Madam Secretary. Today’s historic confirmation sets us on a better path to righting the wrongs of the past with the federal government and inspires hope in our people, especially our young people. It gives us a seat at the table to offer a new and different perspective from a person that has experienced the reality of adversities and challenges of growing up on what federal officials refer to as ‘Indian’ reservations.”

Deborah Dotson, president of the Delaware Nation in Oklahoma.

“Deb Haaland’s willingness to work across the aisle and to share a broader view of the issues is a BIG win for Indian Country and for all Americans. My hope is that under Ms. Haaland’s tenure, we can have true government to government consultation on the issues that affect Indian Country.”

Leonard Forsman, chairman of the Suquamish Tribe of Washington.

“Represent all of Indian Country —very hard thing for one person to do, and I’m just really proud of her and how she’s carried that and been willing to step into that role. because sometimes these things are – the creator kind of puts you in a place and says, ‘all right, this is your pathway, good luck with that.’ And then you just go follow that good red road, as we call it. And she’s done a great job of doing that.

“The idea of the first Cabinet person that is of an Indigenous background is obviously historic, and the fact that it’s Interior is even more important because Interior has a really unique responsibility as compared to other federal agencies. To have someone not just on the Cabinet itself who is Native but to also have someone in such a crucial position who’s responsible for managing those trust relationships with tribes and the vast amounts of cultural and natural resources is unprecedented. It’s amazing.

Gerald Gray, chairman of the Little Shell Tribe of Chippewa Indians of Montana.

“We are the first peoples of this country. Why does something like this have to take this long?”

“Finally, a Native woman — a powerhouse and history maker — who will fight to ensure Native issues and voices are heard. Someone who will protect our land and water and is in a position to protect our planet for future generations. She’s given us a renewed sense of hope and optimism for the future of this country. This is a major milestone and a step forward in our continued fight to transform the systems who have for centuries been used against our communities.”

“She understands sovereignty and appreciates the trust relationship and our nation’s treaty obligations. She recognizes the importance of tribal businesses and knows how these businesses can be an economic engine for states, rural regions, and impoverished areas.”

Only the best for your crowning glory; Indian Princess Hair