Mom: Son shook in fear after schoolmates put noose on him 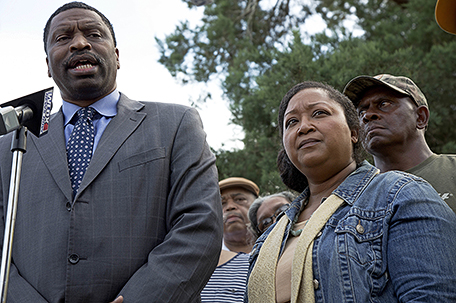 ABOVE PHOTO:  Derrick Johnson, left, president of the Mississippi NAACP, talks to the media on behalf of Stacey Payton, center right, and Hollis Payton, right, the parents of a high school student, in front of the Stone County Courthouse in Wiggins, Miss., Monday, Oct. 24, 2016. Johnson is demanding a federal investigation after the parents said four white students put a noose around their son’s neck at school.    (AP Photo/Max Becherer)

WIGGINS, Miss.–A black mother in Mississippi says her 15-year-old son was shaking in fear as he described white schoolmates putting a noose around his neck two weeks ago and pulling it tight.

Stacey Payton told The Associated Press on Thursday that her son bears no physical injury, but she believes the incident has permanently changed him. She said he continues attending classes and playing football at Stone High School in Wiggins. However, he’s quieter than usual, and she said the family fears retaliation for having brought attention to the Oct. 13 incident.

Payton, a college instructor, said her son met her in her office and told her about the noose a couple of hours after it happened in a high school locker room.

“His first words were, ‘Mom … please stay calm. Don’t panic. I don’t want you to call the school because it’s already been handled,’’’ Payton said. “When I was looking at him, he was shaking and the expression on his face, he was horrified. He was very fearful.’’

She said she was expecting him to say he had received a bad grade or had gotten in trouble for talking in class.

“I sat down and I looked up at him and I said, `Son, just lay it on me. Just give it to me,’’’ she said. “And he said, `Mom, they put a noose around my neck and they pulled it tight and it choked me.’ And I just instantly, it was like a chill went over my body.’’

The Stone County Sheriff’s Department is investigating. Mississippi NAACP President Derrick Johnson is calling for federal authorities to investigate a possible hate crime. Brett Carr, the FBI spokesman in Mississippi, said the bureau is aware of the incident but he can’t confirm or deny whether agents are investigating.

Payton described her son as a peaceful young man and said he was friends with the boys involved, and even called one of them “brother.’’ The Payton family says up to four white students took part.

The school district’s attorney, Sean Courtney, wrote in an email to AP that only one student was accused of misconduct, according to statements from witnesses and those involved. Courtney said that student has been suspended from school “pending the conclusion of the disciplinary process.’’ Following district policy, Courtney did not release the student’s name.

Courtney said there was no report of any racially-insensitive language nor any indication of what the motivation may have been.

Payton said administrators should have contacted her immediately instead of waiting about two hours. After her son had already told her what happened, she received a call from an assistant principal, she said.

“He was very emotionless, just presented simple facts that this is what has occurred on campus,’’ Payton said. “I think just the tone in his voice and the way that he spoke to me just caused a lot of anger to come up.’’

“There have been no new developments regarding further steps being taken,” Johnson told the SUN on Tuesday. “The status remains the same as when we called for an investigation when the incident happened. The parents also have not been informed about any formal investigation or[punitive] actions taken.”

Johnson is unaware of whether the school has spoken to the student body about the incident, or has offered counseling. He further believes that the continued acceptance of the Confederate flag inflames the situation, and creates a hostile atmosphere at the school.

“Earlier in the year, many white students (including those in question) participated in a school parade with the Confederate flag flying from their cars,” he said.

According to Johnson, contrary to previous reports, is that although the young man has white friends at school, at the press conferences it was pointed out by the boy’s mother that the ones who attacked him were not among them. Furthermore, he feels that the school — like much of the state — does not take the history of lynching in Missisippippi, and of its continued connection to the Confederacy and the Confederate flag seriously enough.

The flag itself is still part of the state’s emblem. Johnson sees this as continued resistance to full acceptance of the lasting impact that the Civil War has had upon Mississippi. He doubts that there has ever been a full embrace of the range of treasonous acts committed by the Confederacy at that time. He also maintains that to this day, throughout the state, little history is taught about its negative impact on modern society over 150 years later.

Johnson would like to see the individuals responsible for the noose incident held accountable, and to see justice served. He feels that a strong, decisive response would go a long way in helping to discourage future incidents of this kind. That said, he acknowledges that this behavior originates close to home – in spite of the tremendous progress the country has made over the years on civil rights.

“Brandishing [Confederate] flags is a learned behavior from families and communities. Unfortunately, the adults [of that community] have not accepted history, or how it has been [traditionally]ignored. Their silence only causes future incidents to take place.”

The SUN’s Amy V. Simmons contributed to this article.