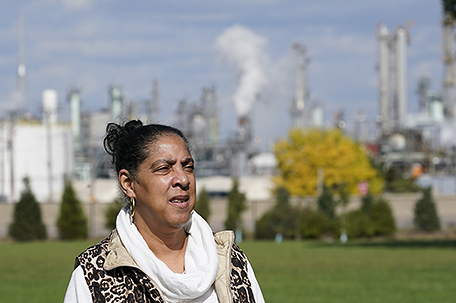 ABOVE PHOTO: Theresa Landrum is photographed near the Marathon refinery, Friday, Oct. 16, 2020, in Detroit. Landrum wasn’t impressed when told that Environmental Protection Agency chief Andrew Wheeler had pledged $200,000 to promote “community health initiatives” in her section of the city during his blitz of visits to battleground states in the presidential election campaign. (AP Photo/Carlos Osorio)

TRAVERSE CITY, Mich. — Theresa Landrum lives in southwest Detroit, where residents complain frequently about dirty air. Tree-shaded neighborhoods with schools, churches and parks lie on either side of an interstate highway and in the shadow of a sprawling oil refinery that belches soot and fumes.

Landrum, a Black retiree from General Motors and a longtime anti-pollution activist, wasn’t impressed when Environmental Protection Agency chief Andrew Wheeler recently pledged $200,000 to promote “community health initiatives” in her section of the city during his blitz of visits to battleground states in the presidential election campaign.

“Is this a joke?” she said. “It would take billions of dollars to fix what is wrong with our environment here. All of a sudden he’s going to throw somebody a grain of sand in a community where people have been poisoned for decades?”

Under President Donald Trump, the EPA has slashed support for some some programs and regulatory protections benefiting disadvantaged communities. His budgets have proposed killing or cutting funds to enforce regulations promoting environmental justice — fair treatment of racial minorities and low-income residents who live near polluting industries and are disproportionately exposed to contamination — although Congress has continued most of the spending.

Now, the agency is portraying itself as a champion of such communities — an initiative skeptics contend is more about wooing Black and Latino support as Trump seeks re-election than protecting their air and water.

Wheeler and other top EPA officials have fanned out nationally in recent months, particularly in swing states such as Michigan, holding news conferences to distribute grants and tout the Trump administration’s record. During his latest Michigan visit Friday, he announced $10.7 million to replace lead service lines in disadvantaged communities in Grand Rapids and Benton Harbor, and educate the public about dangers of lead-tainted drinking water.

Trump’s EPA “has taken meaningful steps to improve the health and environmental conditions for Americans everywhere, especially those in low-income and under-served communities,” Wheeler said Sept. 30 in Traverse City, Michigan, where he announced the $200,000 for Detroit.

U.S. Rep. Rashida Tlaib, a Democrat whose district includes the section of Detroit targeted for the spending, described it as “an insulting drop in the bucket.”

“These grants are a pitiful attempt to distract from the sky high, mounting costs of the Trump EPA’s prioritizing corporate polluters over Black and brown communities,” Tlaib said.

Nine other grants of the same amount were awarded this year for neighborhood and tribal projects. One in Minneapolis will provide education on lead paint dangers, asthma hazards and use of disinfectants to prevent coronavirus. Another will focus on minimizing air and water pollution during wildfires, floods and other disasters at the Coyote Valley Band of Pomo Indians Reservation in California.

In a September speech commemorating the 50th anniversary of EPA’s founding, Wheeler said such efforts would be a focal point of a second Trump term. The agency would promote “community-driven environmentalism” built on restoring polluted industrial sites, better treatment of drinking water tainted with lead or chemicals, and other locally focused actions, he said.

The agency lost sight of its core mission before Trump’s arrival, Wheeler said, focusing excessively on climate change to impress “foreign capitals, over the interests of communities within their own country.”

But critics say the administration’s spending in those communities is undercut by its rollback of environmental regulations and weak enforcement against polluters.

“It’s like a doctor knowing what the root cause of a problem is but saying we’re going to just deal with the symptoms and not focus on a real cure,” said Ali, a former EPA senior adviser who worked on environmental justice for 24 years before resigning less than two months after Trump took office. “If you’re not willing to strengthen existing laws and make sure people are protected, it’s just sugar coating.”

Academic studies have shown low-income and minority communities suffer disproportionately from pollution, partly because so many landfills, factories and other sources are located there. Wheeler acknowledged that in his speech. But he said environmental regulation sometimes makes things worse by, for example, making it hard to build new factories on contaminated sites.

The Trump administration has hampered research identifying unfair burdens on such communities while weakening standards for pollutants that hit them especially hard, such as mercury, ground-level ozone and coal ash contaminants, the Union of Concerned Scientists said in a 2019 report.

Wheeler says “environmental justice is an important concern to the agency, but his agency’s actions aren’t following through with his promise,” said Anita Desikan, a research analyst with the nonprofit advocacy organization.

She also noted EPA’s decision to cut back on enforcing key regulations for polluting industries over the summer — a move Wheeler said was necessary to help businesses take coronavirus precautions.

Wheeler defended EPA’s enforcement record during his September appearance in Michigan. When proposing regulatory rollbacks, he said, the agency has offered replacements that would protect the environment in more cost-effective ways.Southwest Detroit has been the subject of numerous air pollution and public health studies. The 250-acre Marathon Petroleum Co. refinery reached a proposed settlement with state regulators this summer for 10 air quality violations. The area also has a coal-fired power plant, steel mills and other industrial sites.

An hour’s drive north is Flint, a majority Black city of nearly 100,000 still recovering from lead contamination of its drinking water that prompted $100 million in federal assistance for replacing service lines and other infrastructure. Karen Weaver, who was mayor at the height of the crisis, said the problem might have been avoided if governments had given due regard to environmental justice.

“It seems late to be having this conversation, but of course better late than never,” Weaver said, adding that the city could have used one of the $200,000 grants.

Landrum, the Detroit activist and a member of the Michigan Advisory Council on Environmental Justice, said the Trump administration must do more than provide modest grants and make promises to earn credibility with environmentally degraded communities.

“Environmental racism, systemic racism, exists in Detroit and Michigan and throughout the U.S.,” Landrum said. “But people don’t want to see.”