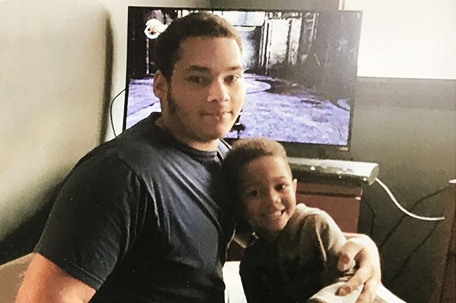 ABOVE PHOTO:  Adam Trammell (left) is shown with his nephew in this family photo. Trammell was 22 when he died after being tased by West Milwaukee police in May. (Photo: Family photo)

MILWAUKEE — Three Milwaukee-area police officers that repeatedly used a stun gun on a mentally ill man during a fatal encounter won’t face charges because prosecutors found no link between his death and their actions.

Milwaukee County District Attorney John Chisholm said in an April 19 letter that officers “did not violate the law” when they responded to a medical emergency last year “under complex circumstances.”

The West Milwaukee officers were called to 22-year-old Adam Trammell’s apartment by a neighbor who said he appeared to be having a mental breakdown; he was standing naked in a hallway and was threatening to hurt himself.

Trammell died less than an hour after the May 25 encounter. An autopsy says the cause of death was “excited delirium” and the manner “undetermined.”

Footage from body cameras obtained by the Journal Sentinel document the final moments of Trammell’s life, starting with arriving officers announcing themselves before breaking down his door after getting no response. The officers found Trammell standing in his apartment’s shower, looking blankly at them and failing to respond to their commands to show his hands and step out.

“Brandon, I need you to come on out,” one officer said, warning him that he’s “going to get tased” if he doesn’t. The officers incorrectly referred to Trammell as “Brandon” because that’s the name the caller gave them.

After an officer used his stun gun for the first time, Trammell immediately laid down on his back in the tub as he screamed in agony. The officers used their stun guns several more times while trying to restrain him as he struggled with them, according to police and camera footage. Officers from a neighboring police department and Milwaukee paramedics eventually arrived to help. At one point, Trammell stopped breathing and he was taken to a hospital, where he was pronounced dead.

“I think those people should resign. The D.A. and the chief of that police department,” Trammell’s father, Larry Trammell, told the Journal Sentinel.

Trammell’s family told police he had a history of “oppositional defiant disorder” and that he was possibly schizophrenic and bipolar, although they weren’t sure and didn’t know what medication he was taking, according to the medical examiner’s report. His family also said Trammell had another encounter with police two years ago because he was running outside naked and the officers used a stun gun then, too.

The medical examiner’s report also said that preliminary information from the doctor who first saw Trammell at the hospital last year indicated he had ingested some household cleaner.