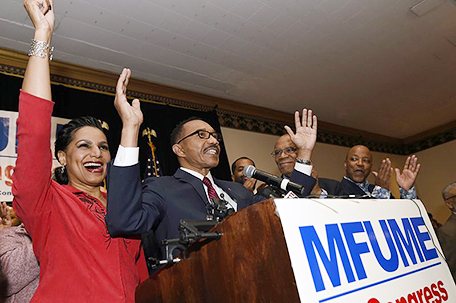 In a district where Democrats outnumber Republicans by more than 4 to 1, the Democratic nominee will be the heavy favorite heading into the April 28 special general election. The majority-Black district includes parts of Baltimore’s inner city that have struggled with drugs and violent crime as well as more well-to-do communities in the suburbs.

For Mfume, who in 1996 stepped down to lead the NAACP after serving five terms as a district’s congressman, it’s a chance to regain the seat he held more than 20 years ago.

“I understand the Congress of the United States. Thank you for sending me there five times with over 82% of the vote each time, and I promise you I will never ever ever let you down. I know the community, and the community knows me,” Mfume said in his victory speech, repeatedly telling supporters “experience matters.”

Diya Hafiz-Slayton yelled over the noise of the crowd at Mfume’s victory gathering in Baltimore to say she was thrilled he had won and cited his experience as a main reason for supporting him.

“He’s from Baltimore. That is exciting to us, and we need that in Baltimore right now. We know that when he gets to Congress he’s going to hit the ground running,” she said. After her win Tuesday night, GOP nominee Klacik tweeted “We did it!!!!!!”

Klacik gained attention last year after her social media posts showing trash in Baltimore prompted President Donald Trump to tweet that the district is a “disgusting, rat and rodent infested mess” where “no human being would want to live.”

A crowded field of 24 Democrats and eight Republicans were on the 7th Congressional District ballot. Mfume dominated in Baltimore city, taking more than 50% of the vote, and he captured more than 40% in Baltimore County. In Howard County, he was among the top three vote-getters, with Maya Cummings and Terri Hill. Klacik won decisively in all three counties in the district.

Mfume also led in fundraising, raising about $266,000, according to federal campaign finance reports filed in the middle of last month. Klacik led in fundraising for the GOP primary with about $48,860, according to filings. Whoever wins the special general election will serve the rest of Cummings’ term through Jan. 3, 2021, and have to stand for reelection in November to keep the seat. Cummings, who won 12 terms in Congress, died in October at age 68. The civil rights activist’s legacy figured prominently in the minds of some voters.

Clarksville resident Laura Shovan, 50, said Cummings was “such an important part of our community.”

“It’s not just the seat. It’s that it was Elijah Cummings’ seat,” Shovan said outside a polling site in Highland.

The Democratic candidates included Cummings’ widow, Maya Rockeymoore Cummings, a former chairwoman of the Maryland Democratic Party, as well as several state legislators who live in the district.

Joi Chapman, 31, of Baltimore found the large number of candidates difficult to filter. She voted for Rockeymoore Cummings because she said she believed she was the most familiar with the late congressman’s views and policies. “We keep complaining about so many Republicans. If you want to see change, you’ve got to vote,” Chapman said outside a polling site at a school.