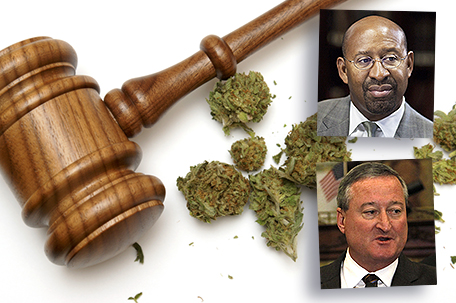 Mayor Michael A. Nutter and Councilman James Kenney last week announced that they have reached an agreement to amend a bill originally introduced by the Councilman which will decriminalize possession and use of small amounts of marijuana in the City of Philadelphia.

“This bill will not legalize marijuana.  Rather, it will decriminalize marijuana – which means that offenses involving small amounts of marijuana will result in a civil penalty, not an arrest or criminal record,” said Mayor Nutter.   “We want to ensure that the punishment for using or possessing small amount of marijuana is commensurate with the severity of the crime while giving police officers the tools they need to protect the health and well-being of all Philadelphians.  Our agreement on this bill is an example of the legislative process working to bring people together, create discussion around an important issue and ultimately reach consensus.”

Councilman Kenney will take the necessary steps to amend the bill during City Council session on September 11, 2014.  Once passed by City Council and signed by the Mayor, the ordinance will go into effect beginning October 20, 2014.

“I am very pleased that we have reached this commonsense agreement that will improve opportunity for countless Philadelphians,” said Councilman Kenney.  “Under this new policy, police officers will be able to remain focused on more serious offenses, and many young people will be spared the life-altering consequences of a criminal record, such as limited job prospects, inability to obtain student loans or even join the armed services.”

Using and possessing marijuana in any amount is and will continue to be illegal in the City of Philadelphia.  The amended bill will simply decriminalize possession and use of small amounts of marijuana.  Details of the ordinance include:

1.A person found to be in possession of a small amount of marijuana (30 grams or less) will receive a Notice of Violation and a $25 fine.

2.A person found to be using (smoking) a small amount of marijuana (30 grams or less) in public will receive a Notice of Violation and a $100 fine or up to nine hours of community service.

3.Philadelphia Police Officers will confiscate any marijuana they find.

4.The citations issued will be processed through the City of Philadelphia’s Municipal Court system.

Persons stopped by police for suspicion of possessing or using marijuana can be arrested for selling or distributing marijuana, possessing more than 30 grams of marijuana, driving under the influence, not giving correct identification or not cooperating.