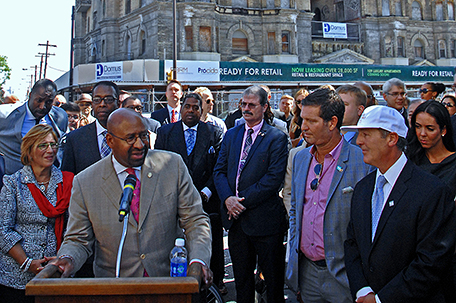 ABOVE PHOTO:  Mayor Michael Nutter addresses crowd in the backdrop of the historic Divine Lorraine Hotel at last week’s groundbreaking of the $44 million redevelopment project.  In the other photo, curious crowds walk through the hotel.     (Photo Bill Z. Foster)

Mayor Michael A. Nutter broke ground on a $44 million redevelopment of the historic Divine Lorraine Hotel, which will be transformed into more than 100 residential units and retail space, including a restaurant, on the ground level.  The redevelopment will be led by Eric Blumenfeld Realty Management.

“As a lifelong Philadelphian, the Divine Lorraine holds a special place in my heart.  It has a proud history and its redevelopment will create a future for this iconic building that rivals its past,” said Mayor Nutter.  “It is with particular pride that I help break ground on this development, which will bring the building back to life and energize and spur further developments along North Broad Street.  I want to thank all of the partners involved in making this vision a reality.”

The Divine Lorraine, a long-standing priority for the Nutter Administration, will be one of the most visible development projects on North Broad Street.  Built in 1894 as a 10-story apartment building with an attached six story utility annex, the Divine Lorraine was converted into a hotel in 1900 and subsequently sold to the Divine Peace Mission in 1948.  It operated as a hotel and mission center until 1999 and has been vacant since.  The property is listed in the National Register of Historic Places and the City of Philadelphia Historic Commission.

“I see a city and its surrounding communities working on all cylinders with a diverse and inclusive plan that will position this Corridor as one of the greatest redevelopment stories anywhere and none of this would have been possible without the great leadership of our Governor, our Mayor, the Deputy Mayor, the Philadelphia Redevelopment Authority and the wonderful folks at the Philadelphia industrial development Corporation. I am just so proud to be a part of it,” said developer Eric Blumenfeld.

The redevelopment is being financed by a combination of private investment, historic tax credits, a loan and grant from the Philadelphia Redevelopment Authority, and a RACP grant from the Commonwealth of Pennsylvania.  PIDC is providing a bridge loan for the RACP grant.

“This is an exciting announcement for Philadelphia and the commonwealth,” said Governor Tom Wolf.  “This redevelopment will create new economic opportunity and housing, and provide a tremendous restoration of this historic property.” 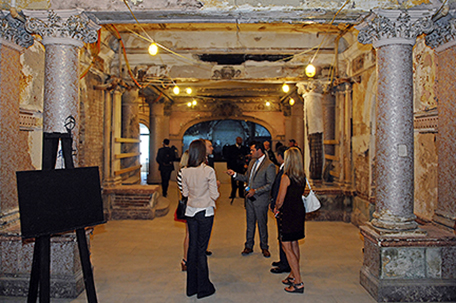 In a speech to the Greater Philadelphia Chamber of Commerce in 2012, Mayor Nutter identified the Divine Lorraine, along with Market East, as two key real estate priorities for his time in office.  He charged Alan Greenberger, Deputy Mayor for Economic Development, with working with development partners and relevant economic development agencies to transform these two sections of Philadelphia.

“A building which for too long has existed as a billboard of blight will now serve as an example of the continued revitalization of Philadelphia and of North Broad Street,” said Greenberger.  “With the renovation of the Divine Lorraine and the overhaul of Market East we have set in motion the revitalization of the two key remaining real estate gaps in our downtown.  These catalytic developments will benefit this city for generations to come and have already begun to spur additional real estate development in these locations.”

The groundbreaking ceremony today was followed by a tour and a pop-up shop featuring Divine Lorraine memorabilia with 10 percent of the profits going to Big Brothers and Big Sisters of Southeastern Pennsylvania.  The ceremony also featured remarks from Nedia Ralston, Southeast Regional Director for the Governor’s Office, and Council President Darrell Clarke, in whose district the Divine Lorraine is located.

“Philadelphians love our city, warts and all, and there are few more obvious symbols of that love than the Divine Lorraine,” said Council President Darrell L. Clarke. “I am thrilled that our city and these visionary partners are finally moving on a plan to bring the Divine Lorraine back to life. North Broad’s best years are not in the past, and I look forward to working with the community and all other stakeholders to make this area a magnet for families, arts, commerce, and culture once again.”