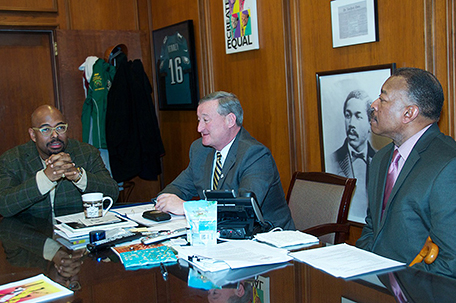 ABOVE PHOTO:  Mayor Kenney speaks with honoree bassist Christian McBride and his father Lee Smith who served as a mentor to Christian early in his learning stages at the Philly Celebrates Jazz on Monday, March 28th in room 202 of City Hall. (Photo / H. Michael Hammie)

“Christian McBride is an ambassador of Philadelphia to the world, not only through his music, but also through his work as an educator and advocate for music education,” said Mayor Jim Kenney.  “Christian’s story and accomplishments demonstrates the power of arts education, in our schools and communities, and the impact it can have on a person’s life and how we can encourage and build the next generation of musicians, artists, and creative thinkers.”

Philly Celebrates Jazz is led by the Office of Arts, Culture and the Creative Economy, and raises public awareness of the jazz heritage of the city, along with the vibrant jazz scene that thrives to this day through a month-long celebration of jazz.  Philly Celebrates Jazz is in celebration of April as Jazz Appreciation Month, an initiative of the Smithsonian Institution’s National Museum of American History that marks its 15th anniversary in 2016.

“The mission of Philly Celebrates Jazz is to showcase jazz, from live performances, art exhibitions, to films, throughout the city of Philadelphia during Jazz Appreciation Month. The Office of Arts, Culture and the Creative Economy is proud to lead the city in this celebration, during which we hope Philadelphians will discover that jazz is all around them,” said City of Philadelphia’s Chief Cultural Officer Kelly Lee.

McBride has won five Grammy Awards, most recently for Best Improvised Solo for jazz standard Cherokee, and has been named as the new Artistic Director of the world-renowned Newport Jazz Festival. McBride can be heard regularly on the radio as the host of NPR’s Jazz Night in America. He also serves as the Artistic Chair of Jazz House Kids, the only community arts organization in New Jersey exclusively dedicated to educating children through jazz.

“On behalf of myself and my family I am incredibly proud to receive this honor from the city of Philadelphia, my hometown,” said 2016 Philadelphia Jazz Appreciation Month Honoree Christian McBride. “My time in Philadelphia, and especially as a student of the Philadelphia High School for the Creative and Performing Arts and at the Settlement Music School has helped me become the musician and person I am today.”

“I am excited to help launch Philly Celebrates Jazz as it will bring attention to the Philadelphia jazz scene and the musicians who throughout my career have been my inspirations, mentors, and collaborators,” said Christian McBride.

Highlights of Philly Celebrates Jazz include internationally renowned jazz pianist and composer Hiromi’s The Trio Project at the Annenberg Center for the Performing Arts’s Zellerbach Theatre and First Friday! Freedom is Calling with jazz violinist Diane Monroe at the Barnes Foundation on April 1, Drexel University Jazz Orchestra’s Jazz Extravaganza XVII with the Howard University Jazz Ensemble on April 15 at the Mandell Theater, and Holding It Down: The Veterans’ Dreams Project, an ongoing collaboration between MacArthur Award-winning pianist Vijay Iyer and poet Mike Ladd about American life over a decade of war on April 22 at the Kimmel Center for the Performing Arts’s Perelman Theater.

On International Jazz Day, April 30, the Center City Jazz Festival will take place at five center city venues from 1-7PM, and the School District of Philadelphia’s All City Jazz Festival, in partnership with The Philly POPS, will showcase the talents of student musicians from across the city at the Temple Performing Arts Center at 3PM.