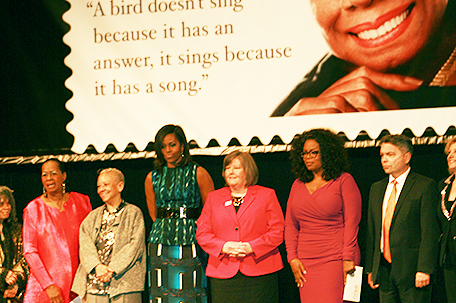 WASHINGTON — The public had the opportunity to witness a historic event when Postmaster General Megan Brennan joined by Oprah Winfrey, Ambassador Andrew Young and other notables in dedicated the Maya Angelou Forever stamp in Washington, DC this week.

The first-day-of-issue stamp dedication ceremony took place at the Warner Theatre, 513 13th St., NW. The event was free and open to the public.

Angelou fans are encouraged to share the news on social media using #MayaForever. The Maya Angelou Forever stamps may be pre-ordered now at this link for delivery shortly after April 7. 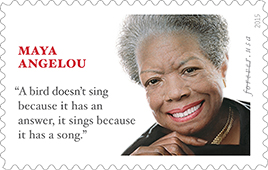 As an author, poet, actress, and champion of civil rights, Angelou (1928–2014) was one of the most dynamic voices in 20th-century American literature. The book, “I Know Why the Caged Bird Sings,” an autobiographical account of her childhood, gained wide acclaim for its vivid depiction of African-American life in the South.

The stamp showcases Rossin’s 2013 4ft. by 4ft. oil-on-canvas portrait of Angelou. The large hyper-realistic painting is part of the Smithsonian National Portrait Gallery’s collection, where it will be on display through Nov. 1. The stamp features this quotation by the pioneering author:  “A bird doesn’t sing because it has an answer, it sings because it has a song.”

The stamp pane includes a short excerpt from Angelou’s book, “Letter to My Daughter.” It reads: “Try to be a rainbow in someone’s cloud.” Art director Ethel Kessler of Bethesda, MD, designed the stamp.

The Postal Service receives no tax dollars for operating expenses and relies on the sale of postage, products and services to fund its operations.