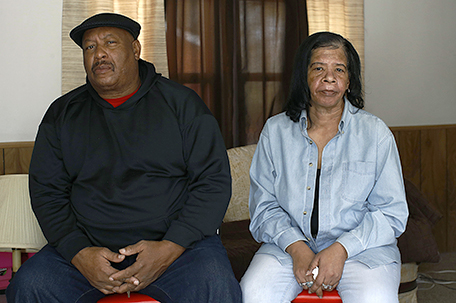 ABOVE PHOTO: Antone Black, left, and his wife, Jennell, pose for a photograph after an interview with The Associated Press in their home in Greensboro, Md. Their son Anton Black, 19, died after a struggle with three officers and a civilian outside the home in September 2018. (AP Photo/Patrick Semansky)

BALTIMORE — The family of a 19-year-old Black man who died in police custody two years ago in a rural town on Maryland’s Eastern Shore filed a federal lawsuit Thursday against two police chiefs, two officers, the state’s Office of the Medical Examiner and others.

The lawsuit by the family of Anton Black was filed in U.S. District Court in Baltimore. The family accuses the two officers and a police chief of causing Black’s death by using excessive force and the Medical Examiner’s Office of “improperly concealing police wrongdoing” and misrepresenting the man’s “death as attributable to natural causes.”

Police footage of the 2018 incident shows officers pinned Black down for more than five minutes as they handcuffed him and shackled his legs as his body eventually went limp. His mother stood nearby, yelling his name and begging for him to respond. He was later pronounced dead.

“It is staggering how much was done wrong in this case that was improper, illegal, unethical and disgraceful,” attorney Ken Ravenell, who represents the family, said in a statement. “But today we took a bold step towards justice for Anton Black and against the police officers who took his life and also against those who were complicit in covering up the injustice.”

On the evening of Sept. 15, 2018, Greensboro officer Thomas Webster IV confronted Black in response to a 911 call from a woman who said she saw Black dragging a boy down a street. While police treated the call as a suspected kidnapping, Black’s family has said the boy was a friend and was not in danger.

Webster’s body camera shows Black running away when the officer told him to put his hands behind his back. Officers chased Black before he locked himself inside a car parked outside his family’s home. An officer shattered the driver-side window with a baton and shocked Black with a Taser before Black got out and struggled with Webster, Ridgley Police Chief Gary Manos, Centreville Police Officer Dennis Lannon and a civilian.

Stepping outside their home, Black’s mother screamed her son’s name after officers wrestled him down on a wooden ramp.

“Anton, stop, baby!” she said as he struggled. Black became unresponsive and later died at a hospital. A medical examiner said a congenital heart condition and stress from the struggle likely contributed to his death.

Webster, Manos, Lannon and then-Greensboro Police Chief Michael Petyo are among the defendants in the lawsuit. Court records do not list attorneys for the defendants.

Petyo last year was charged with misconduct in office in an unrelated case. Webster lost his certification July 2019 and is no longer with the department. His certification came into question when state officials said he failed to disclose nearly 30 use-of-force reports from his police career in Dover, Delaware.