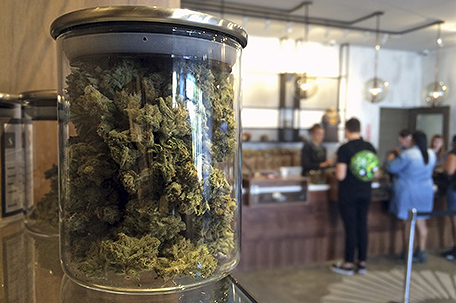 Filling a void created by congressional inaction, voters in a scattering of states tightened gun control laws and approved increases in the minimum wage. The campaign to legalize marijuana achieved a major breakthrough, with victories in at least six states.

In all, more than 150 measures appeared on statewide ballots in Tuesday’s election.

California, Nevada and Massachusetts approved measures legalizing the recreational use of marijuana, while Florida, Arkansas and North Dakota voted to allow pot for medical purposes. A recreational pot proposal lost in Arizona. The outcome of another in Maine was too close to call.

Gun control was on the ballot in four states, including California, which already has some of the nation’s toughest gun-related laws. Voters there approved a measure that will outlaw possession of large-capacity ammunition magazines, require permits to buy ammunition and extend California’s unique program that allows authorities to seize firearms from owners who bought guns legally but are no longer allowed to own them.

Washington state approved a ballot measure that will allow judges to issue orders temporarily seizing guns from individuals who are deemed a threat.

In Maine and Nevada, a group founded by former New York City Mayor Michael Bloomberg spent millions promoting ballot measures that would require background checks on nearly all gun sales and transfers. The measure was approved in Nevada but was rejected in Maine.

With Congress unable to agree on an increase in the federal minimum wage of $7.25 an hour, numerous states and cities have taken action on their own. In this election, Arizona, Colorado and Maine voters approved measures phasing in a $12 minimum hourly wages by 2020. In Washington state, where the minimum wage is $9.47 an hour, voters approved a measure raising that to $13.50 an hour by 2020.

Overall, the results of the marijuana referendums were hailed as historic by legalization activists, given that California is the most populous state. Massachusetts became the first state east of the Rockies to join the movement.

Florida, where the medical pot measure was backed by 71 percent of the voters, and Arkansas became the first states in the South with full-scale medical marijuana programs, which exist in 25 other states.

Collectively, it was the closest the U.S. has ever come to a national referendum on marijuana, which remains prohibited under federal law.

The outcome will more than triple the number of Americans living in states where recreational pot is legal. The jurisdictions where that’s already the case – Alaska, Colorado, Oregon, Washington state and the District of Columbia – have less than 6 percent of the population.

Nebraska was one of three states voting on capital punishment. California had two competing measures on its ballot, one to repeal its rarely used death penalty and the other to speed up appeals so convicted murderers are actually executed. The repeal measure was rejected; the reform measure received about 51 percent of the votes counted by Wednesday morning.

Oklahoma residents approved a measure to make it harder to abolish capital punishment. It seeks to ensure the state has a way to execute prisoners even if a given method is blocked.

Colorado voters approved a measure that will allow physicians to assist a terminally ill person in dying. That’s already a practice in five other states. Coloradans defeated a proposal that would have set up the nation’s first universal health care system.

Among the other topics addressed by ballot measures:

– TAX HIKES: Oregon voters defeated a measure that would have imposed a 2.5 percent tax on corporate sales that exceed $25 million. Washington voters rejected a plan to promote cleaner energy by imposing a tax of $25 per metric ton on carbon emissions from fossil fuels such as gasoline, coal and natural gas.

– TOBACCO TAXES: Voters in Colorado, Missouri and North Dakota rejected proposals to raise taxes on cigarettes and other tobacco products. Californians approved a measure that raises cigarette prices by $2 a pack and places new taxes on electronic cigarettes.