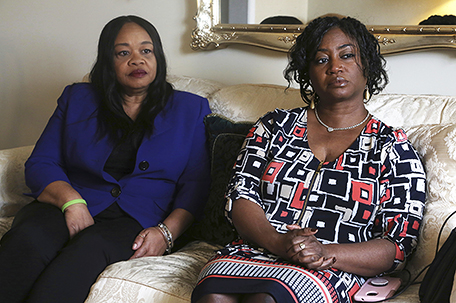 ABOVE PHOTO:  Sandra Thompson, right, speaks alongside Sandra Harrison, both golfers and members of a group of local women known as Sisters in the Fairway, during an interview with The Associated Press, Tuesday April 24, 2018 in York, Pa. Officials at the Grandview Golf Club in York called police on the group Saturday, accusing them of playing too slowly and holding up others behind them. On Sunday club co-owner JJ Chronister told the York Daily Record she called the women personally to “sincerely apologize.” (AP Photo/Jacqueline Larma)

YORK, Pa.–A man who called police on a group of Black women golfers accused of playing too slowly at a Pennsylvania golf club denied to dispatchers that he was acting out of racism.

Grandview Golf Club in York issued an apology following the April 21 incident. The women were club members and have described the experience, which began at the second hole, as demeaning and discriminatory.

In one of two recordings of calls to police posted by the York Daily Record, the caller says the group was “holding everybody up’’ and one of the women accused the golf club of racism. He said no weapons were involved “other than her mouth.’’

The caller told a dispatcher, “We have a tough situation here with a group of golfers that decides they don’t want to abide by the rules.’’

Saying one woman in the group had accused the club of racism, he said  “We’re not being racist. We’re being golf course management that has to have play moving a certain way.’’

No charges were filed, but the confrontation came amid two other similar incidents. A Starbucks employee called police on two Black men in Philadelphia because they hadn’t bought anything in the store. Police handcuffed and arrested them. And employees of an LA Fitness in New Jersey wrongly accused a Black member and his guest of not paying to work out and called police.