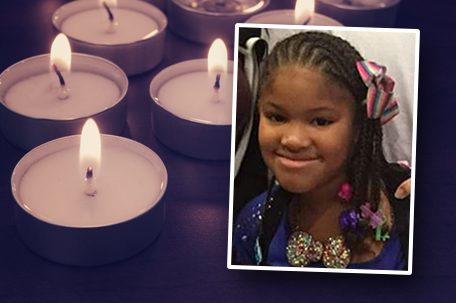 Jazmine Barnes was pronounced dead at the scene

A police manhunt was underway in the Houston area for a White man accused of killing a 7-year-old Black girl in an apparently random shooting on Sunday.

LaPorsha Washington, 30, was leaving a Walmart parking lot in Houston at around 7 a.m. with four children in her vehicle, according to Harris County’s Sheriff’s Office. A man driving a red pickup truck pulled up next to Washington’s car and started shooting into her vehicle and then sped away.

When paramedics arrived, Washington’s daughter, Jazmine Barnes, was pronounced dead at the scene. Washington was shot in the arm but survived her injury. Another child in the car suffered minor injuries from glass fragments.

Harris County Sheriff Ed Gonzalez identified the shooter as “a white male, 40s, a beard,” in a Twitter post.

Authorities have shared only a few details in their ongoing investigation.

“People who usually commit this type of crime talk about it,” Sheriff’s Maj. Jesse Razo told reporters on Sunday. “So, anyone who knows anything, please contact police dispatchers.”

Razo added that investigators planned to review surveillance videos from the entire area.

“This attack seems racially motivated and it will not stand. Make sure that we hold law enforcement accountable in bringing justice for Jazmine Barnes,” the group posted on its Facebook page.

The four children in the vehicle ranged in age from 7 to 15. “They are shaken. Devastated,” Razo said of the girls who survived the shooting. “They lost a sister, especially during the holiday season.”

Rozo vowed that investigators would utilize every police resource to capture the killer.

“And I urge you, whoever did this, you know who you are, please turn yourself in now because we will be looking for you, we will locate you, we will find you,” he said.