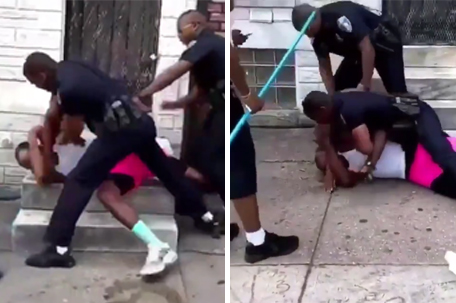 There was reportedly a history between a Baltimore cop and the man he viciously beat down on Saturday.

Baltimore police officials suspended the officer Saturday after the latest video of his interaction with McGrier went viral, according to USA Today. It’s unclear what prompted the officer to repeatedly punch McGrier at a Baltimore sidewalk.

McGrier, responding to the officer, shouts, “For what?” on the video. He follows that question with, “Don’t touch me,” before the officer begins pounding him.

After bashing the suspect with his fists, the officer wrestles him onto the top of a house’s front steps and delivers more blows. He punches the man’s head multiple times as he lays on the steps, eventually holding him down to the ground. McGrier does not fight back. He’s seen on the ground, bleeding from the mouth.

A second officer at the scene failed to intervene.

After all of that, the police did not charge McGrier with any crime, Herring reported. He was recovering in the hospital Saturday night from a broken or fractured jaw, as well as injuries to his eye socket, nose, ribs, and left leg.

This comes against the backdrop of the Baltimore Police Department struggling to comply with reforms under a federal consent decree. Baltimore worked out a road map for changes in how it polices the city’s Black community. A Department of Justice probe into the April 2015 death of Freddie Gray and a mountain of complaints against the police found that the department was routinely using excessive force against Black residents.