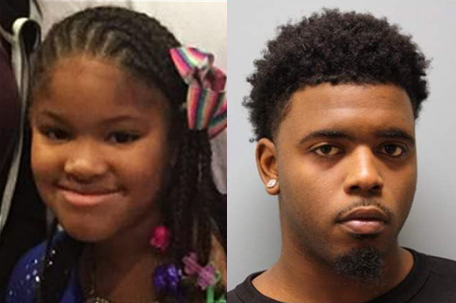 HOUSTON — A Black man was arrested and charged with murder in the killing of a 7-year-old Black girl in a drive-by shooting that authorities said Sunday appeared to be a case of mistaken identity, not a racially motivated attack, as her family feared.

Jazmine Barnes’ family had described the gunman in the Dec. 30 slaying as a White man driving a red pickup, and believed race played a role in the shooting.

But acting on a tip received by a civil rights activist, the sheriff’s department zeroed in instead on Eric Black Jr., a 20-year-old Black man who admitted he was driving a dark-colored SUV from which a passenger opened fire, authorities said.

Harris County Sheriff Ed Gonzalez cautioned that authorities were still investigating, but said: “At this point, it does not appear it was related to race.”

Gonzalez said authorities have identified the second suspect, who is also black, but would not say whether the person was in custody.

Chris Sevilla, Jazmine’s father, said in a brief telephone interview that he was feeling “a bit of relief right now” after the arrest.

At a court hearing early Sunday, prosecutors said a confidential source had contacted the sheriff by email and told him the killers had “shot the car by mistake,” thinking the vehicle Jazmine was in was someone else’s that they had seen earlier in the night. Prosecutors did not say why the killers opened fire.

The sheriff said there was a red truck nearby at the time of the shooting, but the driver did not appear to have been involved, and Jazmine’s family apparently mistook the driver for the gunman.

Black, who was arrested Saturday night during a traffic stop, was charged with capital murder and jailed without bail. Court records did not list an attorney for him. Prosecutors said the 9 mm handgun believed used in the shooting had been recovered from Black’s home.

During Sunday’s hearing, prosecutors said Jazmine’s mother, LaPorsha Washington, had tried to drive to a hospital after the shooting, but one of her front tires had been shot out.

After the shooting, a composite sketch of a white man in a dark hood was widely circulated.

Jazmine’s family and activists had said the shooting was similar to an unsolved incident in the area in 2017 in which a gunman described as White shot into a vehicle carrying at least two black people.

The girl’s killing prompted an outpouring of support for her family from celebrities and ordinary people across the country. On Saturday, hundreds gathered at a rally near where the shooting happened, holding balloons, stuffed animals and signs that read, “Justice for Jazmine.” A $100,000 reward was offered for information leading to an arrest.

Houston Mayor Sylvester Turner said the support Jazmine’s family received provided law enforcement “with a sense of urgency and made Jazmine’s loved ones know they weren’t alone in their time of grief.”

“We share their deep sense of loss and anger,” Turner said.