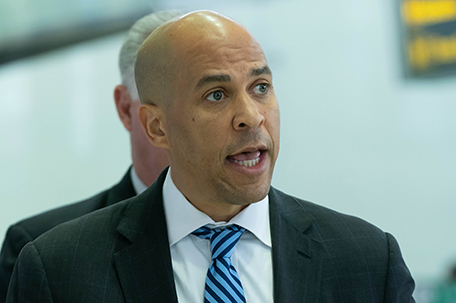 WASHINGTON — Sen. Cory Booker leaped into the 2020 presidential race last Friday with a call for Americans to unite in a time of bitter polarization while some of his Democratic rivals are taking a more combative stance as they vie to take on President Donald Trump.

Booker’s entry into the Democratic primary was steeped in history and symbolism, befitting his status as the second black candidate in a historically diverse field. Invoking the legacy of the national movements for civil rights and for women’s suffrage, the New Jersey senator urged a return to a “common sense of purpose” and cast his appeal to the nation’s better angels as an uplifting alternative to Trump.

The 49-year-old Booker told reporters outside his home in Newark that “love ain’t easy,” adding: “The people I admire are the people that lead by calling out the best of who we are and not the worst. So, I’m running for president because I believe in us. I believe in these values.”

Whether Democrats are in the mood to embrace Booker’s optimistic persona after two years of fuming about Trump’s presidency remains to be seen. With Massachusetts Sen. Elizabeth Warren running as a champion for the middle class in a fight against powerful interests, and California Sen. Kamala running on taking on Trump directly, Booker’s fate may hinge on a bet that the electorate will respond again to the soaring oratory that helped Barack Obama breakthrough in 2008.

Known for his easy way with voters during an age of selfies and social media, Booker, the former mayor of Newark, announced his bid with a video that showcased his personal ties to the “low-income, inner city community” he says he led to a comeback. Booker won a special Senate election in 2013 and then a full Senate term in 2014.

Veteran GOP strategist Doug Heye lauded Booker’s video for a “fresh perspective” and suggested that the senator could fill a key niche in the 2020 primary.

“There will be plenty of time for Democrats to ‘take on Trump’ in the coming months,” Heye said. “No doubt that is what a sizable part of the Democratic base wants, but if the campaign is all about who is the true anti-Trump, Democrats could miss connecting with voters who want to see a Washington that works.”

Booker hustled to make those connections on Friday, calling in to three radio shows popular with black and Hispanic listeners and appearing on “The View,” a staple for female audiences, with his mother in the audience. Asked how a committed vegan could win fans at the meat-and-butter-centric Iowa state fair, Booker said he enjoys “lots of deep-fried stuff” and underscored his family ties to that pivotal early-voting state: His grandmother was born there.

Booker is cultivating key powerbrokers Iowa, as well as early voting New Hampshire and South Carolina. He plans to visit all three states before March.

Before he hit the road, the White House took its own hit at his candidacy. Kellyanne Conway, a counselor to the president, told CBS News that Booker “often sounds like a Hallmark card and not necessarily a person who is there to tell you everything he’s accomplished.”

Booker will be able to run for a second full Senate term in 2020 while running for president, thanks to a law that New Jersey’s governor signed in November.

Booker joined a field getting more crowded and diverse by the week. As many as five more Democratic senators could soon mount their own primary bids, creating a competition for voters’ attention. Several of Booker’s rivals for the nomination bring higher name recognition to a race that could still include former Vice President Joe Biden.

He could face further difficulty winning the hearts of the progressive Democratic base due to his past financial ties to banking and pharmaceutical interests. Booker said he would stop taking contributions from pharmaceutical companies in 2017, the year that he partnered with potential rival Sen. Bernie Sanders of Vermont on a bill that would allow importation of prescription drugs from Canada. Asked on Friday about Harris’ suggestion that the private health insurance industry be eliminated in the transition to single-payer health care, which both she and Booker support, Booker said that he envisions the continued existence of private providers.

Still, Booker is underscoring his progressive identity by joining many other prominent Democratic White House contenders by forswearing all donations from corporate political action committees and federal lobbyists to his campaign, which is dubbed Cory 2020. A prominent Booker supporter, San Francisco attorney Steve Phillips, says he is working on millions of dollars in committed donations to a so-called super PAC that would boost the senator’s candidacy, but Booker’s campaign is openly against super PACs playing any role in the presidential race.

And he was resolute on Friday in elevating his message that “the only way we can make change is when people come together.”

“We’ve got to be a country that gets back to sharing a common sense of purpose about what we’re for and who we’re for,” Booker said during a satellite radio interview.