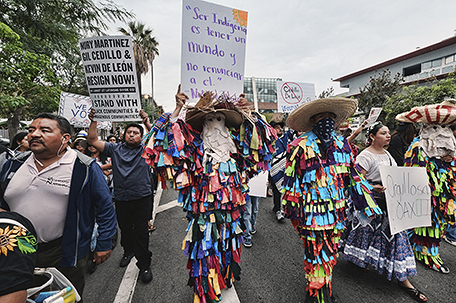 ABOVE PHOTO: Comunidades Indígenas en Liderazgo (CIELO) and leaders from Indigenous communities across California carry signs and march in the streets of Los Angeles during a demonstration demanding the resignations of L.A. City Councilmen Kevin de León and Gil Cedillo for their participation in a leaked discussion that included racial slurs on Saturday, Oct. 15, 2022. (AP Photo/Richard Vogel)

LOS ANGELES — An anonymously leaked recording of crude, racist remarks and political scheming that led to the resignation of the Los Angeles City Council president and a powerful labor leader left behind a mystery: Who made the tape, and why?

The posting of the year-old recording on the website Reddit in the run-up to November’s midterm elections raised obvious suspicions of political motive. Much of the hourlong, private conversation among several councilmembers and the head of Los Angeles County Federation of Labor -– all Latino Democrats –- centered on fortifying their clout in the realignment of Council districts.

It has now prompted a state investigation.

“It’s blatantly obvious it was an insider job,” said Mark Gonzalez, who heads the Los Angeles County Democratic Party and believes the most likely target of the unknown person who recorded the meeting was federation president Ron Herrera.

Herrera has since resigned.

“It had to be somebody who had the access, and who knew his calendar, who was aware of that,” Gonzalez said. “Everybody is coming up with their own speculation.”

Former Council President Nury Martinez, the first Latina to hold the post, resigned last Wednesday after President Joe Biden joined a chorus of officials calling on those involved to step down.

Martinez was recorded in the conversation as saying that white Councilmember Mike Bonin handled his young Black son as if he were an “accessory” and used derogatory terms in describing both of them, the Los Angeles Times reported Sunday.

At another point on the hourlong recording, she called indigenous immigrants from the Mexican state of Oaxaca “tan feos,” or “so ugly.” The conversation also included crass and bigoted comments about Jews, Armenians, and other groups.

The source of the tape “is a parlor game going on all over town,” said former Los Angeles County Supervisor Zev Yaroslavsky. “It may never be solved.”

Two other Council members who attended the meeting remained out of public view on Friday, Gil Cedillo and Kevin de Leon, holding their seats despite mounting pressure to resign.

No one at the meeting has spoken publicly about the possible source of the recording.

The discussion centered on protecting Latino political power during the redrawing of council district boundaries, known as redistricting. The once-a-decade process can pit one group against another to gain political advantage in future elections.

The labor federation did not respond to a series of questions, including detailing who attended the meeting. It issued a one-sentence statement which did not specifically say the meeting with the Council members was not recorded by the organization.

“It is not nor has it ever been the policy of the Fed to record meetings,” interim President Thom Davis said in a statement.

In today’s tech-saturated society, it’s simple to furtively record a private conversation with widely available devices. Mobile phones have highly sensitive microphones and easily can be concealed in a briefcase, purse, or backpack.

The recording reveals possible clues: Clicks that could be briefcases opening, and noises that sound like papers shuffling that might suggest a microphone somewhere on or near the tabletop.

The language was appalling, Yaroslavsky said, and he could not recall any incident in which a private meeting among elected officials was privately taped. “I’ve never seen anything like this,” he said.

The Los Angeles Times reported that the recording was posted on Reddit by a now-suspended user. It is unclear who recorded the audio or who uploaded it to the website.

The disclosure of the secret recording unsettled the Los Angeles political community, especially those who have worked at the labor group’s headquarters. Gonzalez, the Democratic leader, said people were feeling “unsafe.”

Longtime Los Angeles-based Democratic consultant Michael Trujillo said whoever made the tape might never want to be identified. The person could be seen as a hero in some quarters for exposing racism within the highest ranks of City Hall, but it could also expose the person or persons to legal action for recording a conversation without consent, which is illegal in California. State law requires a person making a recording of someone else to obtain consent.

“The problem is that same hero is going to be facing criminal and civil court cases,” he said.