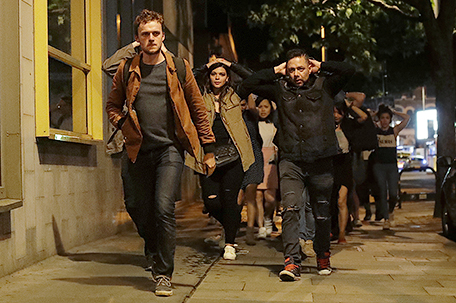 ABOVE PHOTO:  People with their hands on their heads about 10 minutes after midnight as they leave from inside a police cordon after an attack in London, Sunday, June 4, 2017. Armed British police rushed to London Bridge late Saturday after reports of a vehicle running down pedestrians and people being stabbed nearby. (AP Photo/Matt Dunham)

By Paisley Dodds and Nicole Winfield

LONDON — The youngest of the London Bridge attackers pleaded with his mother to settle with him in Syria but instead moved to Britain where his extremist views hardened and he fell into the company of a bloodthirsty gang that launched the latest attack on British streets, his mother said Wednesday.

Valeria Khadija Collina last spoke with her 22-year-old son, Youssef Zaghba, by telephone just two days before he and two other men plowed a van into a crowd near London Bridge and went on a stabbing rampage. Eight people were killed and dozens wounded. All three of the assailants were shot dead.

Zaghba, an Italian national of Moroccan descent, initially told his mother that he wanted to go to Syria to start a family in a religious Islamic climate – not to fight. But he changed, she said, when he went to Britain about a year ago and was seduced by radical views propagated on the internet.

“Last year … when I went to England, he was … more rigid,” Collina, an Italian convert to Islam, told reporters in a series of interviews at her home in Bologna, Italy. “From his face, from his look, I could see there was a radicalization, as you say. And this happened in England, absolutely.”

The other two attackers were identified as Khurum Butt, a 27-year-old whose extremist views had been reported to police, and 30-year-old Rachid Redouane, also known as Rachid Elkhdar, a pastry chef who claimed to have dual Moroccan-Libyan citizenship.

It was not immediately clear how the three knew each other, but Collina said one of her son’s friends recognized one of the other attackers, though it wasn’t clear which one that was.

Butt, who was born in Pakistan and moved to Britain as a child, had worked in 2015 in the office at Auriga Holdings Ltd, which manages some Kentucky Fried Chicken franchises in Britain. Company officials said they had no evidence that either of the other attackers worked at any of the franchises.

Both Butt and Zaghba were known to British law enforcement, raising questions about whether anything could have been done to prevent the assault. 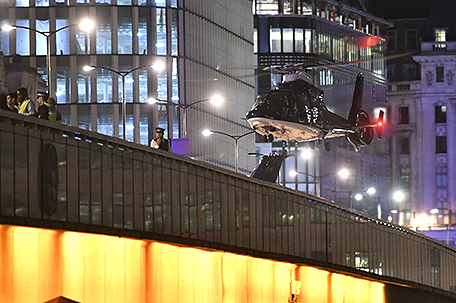 An helicopter lands on London Bridge after an attack in central London, Saturday, June 3, 2017. Armed British police rushed to London Bridge late Saturday after reports of a vehicle running down pedestrians and people being stabbed nearby.
(Dominic Lipinski/PA via AP)

Italian authorities said Zaghba was stopped at the Bologna airport in March 2016 and questioned, but never charged with a crime. Italian officials said suspicions about him were shared with British authorities and his name was listed in the Europe-wide intelligence-sharing system. He was also stopped at London’s Stansted airport in January, but let go.

Collina said police called her after her son was stopped at Bologna airport and asked if she knew he was going to Turkey. Collina said she urged them to detain her son and prevent him from going.

“When they asked him what he was going to do in Istanbul, rather than saying ‘tourist’ he said ‘terrorist,’” Collina told The Associated Press and other media, calling that a “mental lapse” and not a sign of intent. However, she said she and the police assumed he wanted to eventually go to Syria, given he only had a one-way ticket to Istanbul and a small backpack.

His passport and cellphone were seized, but he got them back after a court determined there wasn’t enough evidence to arrest him.

Collina said Zaghba was monitored by Italian intelligence agents each time he came to Italy to visit her after that initial run-in with authorities. She said she told her son to be careful about anything he did after that, including surfing the internet, adding that she didn’t approve of his London friends and never felt comfortable in his London neighborhood.

Although news of her son’s death came as a shock, she said she could only share the pain of the victims’ families. “It’s something that has no sense, for any religion, or any ideology,” she said, choking back tears and calling her son’s actions a “deviation of terror.”

Seated cross-legged on cushions on the floor of her modest Bologna home, her head veiled, Collina said her last phone conversation with her son was “sweet.”

“He had gone to live in an outside building in the garden and was happy because he said it was bigger and when he opened the door there were trees,” she said. “And after I thought that these images of a garden were similar to the images of paradise.”

British security and law enforcement officials are investigating Butt as the potential ringleader of the cell, according to a security official who spoke on condition of anonymity because he was not authorized to discuss the ongoing details.

Several people had alerted police to Butt’s extremist views and he also appeared last year in a documentary, “The Jihadis Next Door,” in which he is shown unfurling a black-and-white flag associated with the Islamic State group.

Butt’s family said Wednesday they were “shocked and appalled” by his actions. “Now, more than ever, we need to work together to stop the actions of the mindless few who claim to be acting in the name of Islam,” they said.

Both British authorities and Ireland’s Police Commissioner Noirin O’Sullivan have said they had no evidence Redouane was involved in any terror cell during his time in both countries. Two people believed to have documents linked to Redouane were arrested in Ireland, though only one remained in custody Wednesday.

Redouane had previously been refused asylum in the UK in 2009. However, his 2012 marriage to Charisse O’Leary, a British citizen, allowed him a European Union identity card that granted him easy travel between Britain and Ireland. British officials declined to comment on why his asylum request was denied.

O’Leary said Wednesday she broke up with Redouane six months ago. They had a young daughter.

“I am deeply shocked, saddened and numbed by the actions of my ex-partner who has killed and injured so many innocent people,” O’Leary said in a statement. “My thoughts and efforts now are with trying to bring up my daughter with the knowledge that someday I will have to try and explain to her why her father did what he did.”

Although Redouane was born in Fez, Morocco, his father was Libyan. In 2011, the younger man allegedly went to fight Moammar Gadhafi and joined a militia that sent fighters on to Syria, according to British media reports that could not be immediately confirmed with Libyan or British authorities.

Salman Abedi, the man behind the Manchester bombing last month, also had Libyan connections. His family had sought asylum in Britain but later returned to Libya, where authorities say his father belonged to a militant group backed by al-Qaida. Abedi’s younger brother was being held for questioning in Libya.

Saturday’s attack – the third in three months in which suspects had been on the radar of security officials – has prompted Prime Minister Theresa May to call for tougher counterterrorism laws even if it means changing human rights protections.

Reaction to the attack has dominated the final days of campaigning before Thursday’s general election in Britain. Opposition Labour Party leader Jeremy Corbyn and others have criticized May for cutting police numbers by roughly 20,000 during her tenure as home secretary.

Since the attack, the number of racist incidents has spiked, according to London’s Mayor Sadiq Khan. Police have made 25 arrests for hate crime offences since the attack.

“I’m calling on all Londoners to pull together, and send a clear message around the world that our city will never be divided by these hideous individuals who seek to harm us and destroy our way of life,” Khan said.