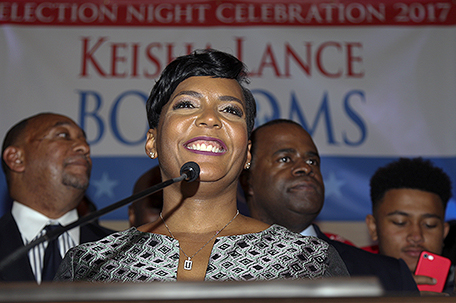 Atlanta voters woke up to deja vu Wednesday in the racially polarized contest to choose the city’s next mayor, with one candidate laying claim to City Hall while the other vowed to seek a recount over a margin of just 759 votes.

The Tuesday runoff between Keisha Lance Bottoms, who is Black, and Mary Norwood, who is White, split Atlanta practically in half after a vitriolic campaign punctuated by political grudges and allegations of corruption. Unofficial results showed Bottoms leading with 46,464 votes, or 50.41 percent, to Norwood’s 45,705 votes, or 49.59 percent.

Election officials say a recount could happen next week if Norwood formally requests one. Results could be certified as soon as Saturday. Norwood would then have 48 hours to request the recount, which could take about three hours to complete.

For Norwood, the outcome virtually mirrored her 2009 loss to current Mayor Kasim Reed by a mere 714 votes. Norwood requested a recount, which ultimately produced only one additional vote. On Wednesday, Norwood wasn’t seen at any public events and her campaign declined an Associated Press request for comment on the race.

Bottoms, 47, told WSB-TV in an interview Wednesday that she has not spoken with Norwood but is confident a recount would not change the results.

A win for Norwood, 65, would give Atlanta its first-ever white female mayor, and end the Democratic Party’s hold on an office it has held without interruption since 1879.

If Bottoms wins, she would become Atlanta’s sixth consecutive African-American mayor, a trend that began with Maynard Jackson in 1973 and cultivated the balance between Black political clout and White business interests that has come to define the city.

“This was a story of turnout,” Emory University political scientist Andra Gillespie said. “(Bottoms) is going to have to figure out how to bridge the divide across communities who say they want the same thing, but had different strategies for achieving these goals.”

That dynamic is now threatened by an influx of newcomers, said Andrew Young, who served as mayor from 1982 to 1990 and endorsed Bottoms in the runoff. Now 85, Young said the elders who worked hard to make Atlanta the “City Too Busy to Hate” are moving off the scene, and “the new people coming in don’t realize how hard we worked.”

“It’s not Black mayors — it’s the best mayor,” Young said. “Until a more qualified White person decides to run, this will be the case.”

The runoff was seen as a test of the staying power of the city’s long-dominant Black political machine and how it would respond to demographic and economic changes. Atlanta’s last White mayor, Sam Massell, left office in 1974 and was succeeded over the next four decades by Jackson, Young, Bill Campbell, Shirley Franklin and Reed.

Although Atlanta’s population is less Black than it was in 2009 — 53 percent, compared with 56 percent then — Black Atlantans still constitute a majority of registered voters and overall turnout. Tuesday’s race saw 92,169 votes cast, less than 20 percent of the city’s roughly 500,000 residents.

Votes tracked along racial lines in north-side and south-side neighborhoods; both candidates won votes in the political battleground of east Atlanta.

Though the race has yet to be officially called, Bottoms claimed victory early Wednesday at an Atlanta hotel flanked by her family and Reed, telling supporters: “For all the little girls out there who need somebody to believe that you are better than your circumstances, I want you all to remember that black girl magic is real.”

Observers say Black women were likely key in giving Bottoms’ her unofficial lead. Bottoms was the only Black woman on the ballot and the top vote-getter in the Nov. 7 general election. In the runoff, she was boosted by Harris, who has been touted as a potential 2020 presidential candidate.

“Everybody in our culture looked at what was going on in Atlanta,” said Reed, who is leaving office after two terms.

Reed loomed large over the race in his dual roles as a chief strategist for Bottoms and a polarizing figure whose battles with his political enemies threatened to overshadow her campaign. He said whether Bottoms is the last Black mayor will be up to voters.

“I totally believe that right now, a white person could be mayor of Atlanta,” Reed said. “But it’s about talent, merit, and who you put up.”