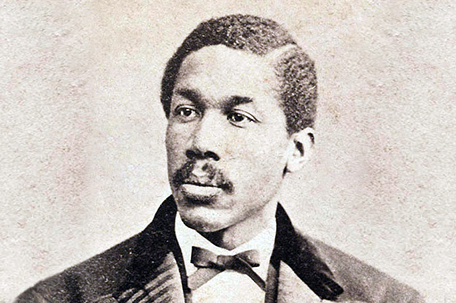 Voting and civil rights activist Octavius V. Catto was shot to death on his doorstep on October 10, 1871, the first Election Day that African Americans were allowed to vote. His murder was the result of widespread intimidation and violence aimed at African- Americans in an effort to deter them from going to the polls. He was only 32.

Octavius Valentine Catto was born free on February 22, 1839, in Charleston, SC, to Sarah Isabella Cain and the Rev. William T. Catto, an ordained Presbyterian minister. His mother was a descendant of one of Charleston’s most distinguished mulatto families, and his father had been a slave millwright who gained his freedom.

William Catto brought his family north when Octavius was about five years old, first to Baltimore and finally settling in Philadelphia. In the city, Catto was afforded an excellent education, attending Vaux Primary School and then Lombard Grammar School, both segregated institutions.

In 1854, he became a student at that city’s Institute for Colored Youth, which would later become the historically Black college Cheyney University. There, he excelled as a student. In 1858, he graduated valedictorian of his class.

Catto did a year of post-graduate study, including private tutoring in both Greek and Latin, in Washington, D.C. In 1859, he returned to Philadelphia, where he was hired as a teacher of English and mathematics at the institute.

By his early 20s, Catto was one of the most influential African- American leaders in Philadelphia. The Civil War stoked Catto’s activism for the abolition of slavery and equal rights for all men. He joined with Frederick Douglass and other Black leaders to form a Recruitment Committee to sign up black men to fight for the Union and emancipation.

He was a major in the Pennsylvania National Guard during the Civil War, and was active in recruiting African- Americans to serve in the United States Army — the first African- Americans to officially serve under federal colors. He was a member of numerous civic, literary, patriotic and political groups, including the Franklin Institute, the Philadelphia Library Company, the Fourth Ward Black Political Club, and the Union League Association.

In addition to being a scholar and educator, Catto was also an athlete — helping establish Philadelphia as a major hub of the Negro baseball league.

He was tirelessly dedicated to social justice for all African- Americans. In 1864, he and other Black leaders from all over the country met at the National Convention of Colored Men in Syracuse, NY, and established the National Equal Rights League (NERL) with Frederick Douglass as president. NERL focused on removing racial barriers in Union states.

Catto fought for the right of African Americans to ride in streetcars in Philadelphia, and advocated for voting rights for African Americans by calling on Pennsylvania to ratify the 15th Amendment This was achieved in October 1870.

With the ratification of the 15th Amendment, Catto’s life would take a tragic turn. He was shot to death on his doorstep on October 10, 1871, the first Election Day that African Americans were allowed to vote. His murder was the result of widespread intimidation and violence aimed at African- Americans in an effort to deter them from going to the polls. He was only 32.