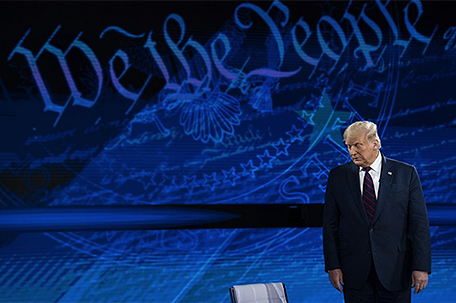 President Donald Trump came to Philadelphia on Tuesday to speak to undecided voters, collect the endorsement of the Fraternal Order of Police, and give fact checkers a whole lot to do.

One of the first people to meet President Donald Trump at Philadelphia International Airport when he came to town on Tuesday was John McNesby, the president of the Philadelphia Fraternal Order of Police.

The national FOP had, as it did in 2016, just given Trump it’s endorsement for a second term, and the president took the time to thank McNesby and the police for their work in quelling unrest during protests this summer, work that included officers tear gassing Black Lives Matter protestors on I-476.

McNesby was most likely one of the last friendly faces that the president saw before entering the National Constitution Center for a town hall with undecided Pennsylvania voters moderated by ABC’s George Stephanopoulos. He was met at the museum by supporters and protestors before going in to talk with these voters.

How it went for the president depends on how you feel about Trump, his response to the coronavirus pandemic, and, well, facts.

From the first question on the coronavirus, to the questions on police/community relations and race relations to the economy, Trump rambled on, blaming the virus on China, calling for the national guard to be sent to quell police brutality protests and being occasionally fact checked by Stephanopoulos.

For example, Rev. Carl Day, a pastor from Philadelphia who voted for Green Party candidate Jill Stein in 2016, asked about the phrase “Make American Great Again,” and pressed Trump on when America had ever been great for Black people.

“Well, I can say this,” Trump said. “We have tremendous African American support. You’ve probably seen it in the polls. We’re doing extremely well with African-American, Hispanic-American at levels that you’ve rarely seen a Republican have. If you talk about make America great, if you look at just prior, and I’m talking about for the Black community, you look just prior to this horrible situation coming in from China, when the virus came in, that was the — probably the highest point, home ownership for the Black community, home ownership, lower crime, the best jobs they’ve ever had, highest income, the best employment numbers they’ve ever had…”

Rev. Day tried to steer Trump a little closer to answering his actual question, with limited success. After pointing out that not much has changed for Black people in decades, including his term, Day honed in.

“Because you say again, we need to see when was that great, because that pushes us back to a time in which we cannot identify with such greatness,” Day said. “And I mean you’ve said everything else about choking and everything else, but you have yet to address and acknowledge that there is a race problem in America.”

The wheels on the bus kept going.

“So, I hope there’s not a race problem,” Trump responded. “I can tell you there’s none with me, because I have great respect for all races, for everybody. This country is great because of it.”

Trump was also asked several questions about the nation’s coronavirus response. Most of his answers focused on blaming China for “letting it happen” rushing a vaccine to market and pointing out that if you removed all of the so-called “blue” states out of the equation, everything would have been fine.

He was also asked by one of the voters why there was no nationwide mask mandate. Trump responded by saying that they aren’t for everybody.

“Who are those people?” Stephanopoulos asked.

“I’ll tell you who those people are,” Trump said. “Waiters. They come over and they serve you, and they have a mask. And I saw it the other day when they were serving me, and they’re playing with the mask. I’m not blaming them. I’m just saying what happens. They’re playing with the mask, so the mask is over, and they’re touching it, and then they’re touching the plate. That can’t be good.”

But while the president was sharing his version of truth with Pennsylvania voters, supporters of his Democratic opponent, former Vice President Joe Biden, weren’t necessarily sitting silently.

For Street, the fact that someone who was currently suing the Commonwealth to keep it from having drop boxes in place for voters concerned about voting in person due to the coronavirus and who believes that peaceful protest should be answered with the National Guard has a lot of nerve coming to the birthplace of liberty.

“[Trump] coming here and standing in the place where liberty was founded — while he does everything he can to frustrate liberty — is ridiculous,” Street said. “I think the people of Pennsylvania will reject it…And we’re going to elect President Joe Biden [and] Vice President Kamala Harris that care about our communities and that will be there.”

But Gauthier welcomed the president to the city. He needs to hear from those most impacted by his decisions regarding the coronavirus and unemployment that many residents are suffering as a result.

“He asked us, ‘what do we have to lose?’,” Kenyatta said, referring to a question Trump asked Black voters in 2016. “And now we have an answer to that question. We’ve lost over 8,000 Pennsylvanians to a pandemic that he has constantly downplayed, and said it would go away like a miracle, even though he was secretly talking about what we’re saying he knew how deadly and how dangerous it was. We have lost thousands of Pennsylvania businesses, many of whom may never recover and had no shot at being able to recover because the PPP program wasn’t given out to the small businesses, the mom and pop shops that needed it the most.”

With seven weeks left until Election Day, the Biden campaign also released a memo for reporters that details the actions the campaign will be taking to try and win in Pennsylvania, a state Hillary Clinton lost by just over 44,000 votes in 2016. Those efforts will include phone banking and advertising.

The last day to register to vote in the November election in Pennsylvania is Oct. 19 and the last day to request a ballot by mail is Oct. 27. Early voting began on Sept. 14.