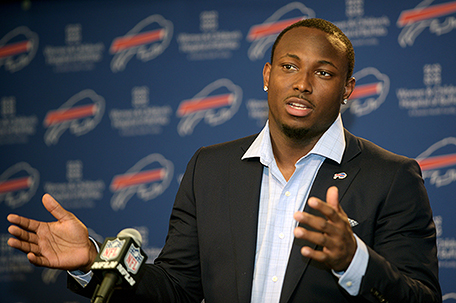 ABOVE PHOTO:  Buffalo Bills running back LeSean McCoy speaks to the media during a press conference in Orchard Park, N.Y.  The former Eagles RB is under investigation for the assault of two off-duty police officers on Sunday morning at a private nightclub in Old City.  (AP Photo/Gary Wiepert, File)

Buffalo Bills running back LeSean McCoy is under investigation over the alleged assault of two off-duty police officers at a Philadelphia nightclub.

The incident occurred early Sunday after an argument broke out between McCoy’s party and the officers over a bottle of champagne.

After one 40-year-old officer was knocked to the ground, he was punched, kicked and stomped multiple times on his body and head, police said Monday.

When the second officer, also 40, intervened with security guards, he was also injured, police said. All were ejected from the club.

One officer had a broken nose, broken ribs and a sprained thumb, police said, and the second was hospitalized with a possible skull fracture.

“Certainly over a bottle of champagne, nothing warrants an assault like this,” police Lt. John Stanford said.

A person familiar with the investigation confirmed to The Associated Press that McCoy was one of the four men under investigation. He spoke on condition of anonymity because he was not authorized to publicly discuss the case.

McCoy’s agent, Drew Rosenhaus, didn’t immediately return a message seeking comment Monday. McCoy played for the Bills last season after being traded from the Philadelphia Eagles, where he played for six seasons.

The Bills released a statement saying they were aware of the report and were gathering information.

Police said they did not want to publicly identify the four suspects until arrest warrants are approved, though they said at least some had NFL connections.

The two officers did not identify themselves as policemen to their alleged attackers, Stanford said.

The fight over the bottle of champagne appeared to result from a misunderstanding. Stanford said a member of the football players’ party thought a bottle belonged to his group but in fact receipts showed it did not.

According to a police incident report obtained by The Philadelphia Inquirer and KYW-TV, the incident occurred at the Recess Lounge in Philadelphia’s Old City neighborhood.

Police said they recovered video surveillance from outside the club, showing both parties being ejected. They were also seeking any cellphone video that may have been shot inside the club by patrons.