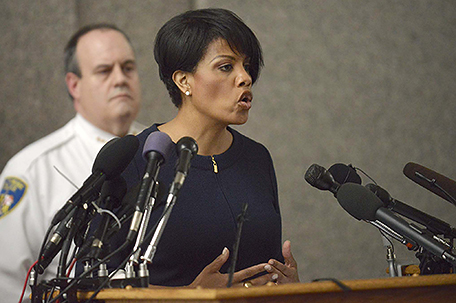 ABOVE PHOTO:  Mayor Stephanie Rawlings-Blake speaks to the media at a news conference on the death of Freddie Gray in Baltimore, Monday, April 20, 2015. Baltimore’s top police officials, mayor and prosecutor sought to calm a “community on edge” Monday while investigating how Gray suffered a fatal spine injury while under arrest. Six officers have been suspended, but investigators say they still don’t know how it happened. (Kevin Richardson/The Baltimore Sun via AP)

BALTIMORE — The lawyer for the family of Freddie Gray, a black man who died of spinal injuries during an arrest in Baltimore, said he believes the police had no reason to stop the man in the first place.

Gray, 25, was arrested on April 12 after police “made eye contact” with him and another man and the two started running, authorities said. Gray was placed in a transport van, and roughly 30 minutes later was rushed to the hospital in critical condition. Gray died Sunday of what Deputy Police Commissioner Jerry Rodriguez described at a Monday news conference as “a significant spinal injury.”

What led to that injury — and why Gray was initially pursued by police — is still unknown.

According to court documents, Officer Garrett Miller sought to charge Gray with carrying a switchblade, which was discovered in Gray’s pocket after he was stopped.”

Police Commissioner Anthony Batts said the reason for Gray’s stop is “a question we have to dig into.”

Billy Murphy, the lawyer hired by Gray’s family, said he believes the officers had no probable cause to stop Gray.

“They’ve made concessions on lack of probable cause,” Murphy said of officials. “Running while Black is not probable cause. Felony running doesn’t exist, and you can’t arrest someone for looking you in the eye. You have to believe he committed a crime and have an objective basis for that belief. They had none of that.”

Gray’s death has prompted daily protests and a vigil was planned Tuesday evening at the spot where he was arrested.

The death comes six months after Baltimore officials released a plan to reduce police brutality and misconduct. The plan followed a request by city officials to the U.S. Justice Department to review police policies and procedures.

The Justice Department’s review should include a broad investigation of whether officers have committed civil rights violations, said the Rev. Cortly C.D. Witherspoon, president of the Baltimore chapter of the Southern Christian Leadership Conference. He said he plans to send the letter with that request by Wednesday.

Officials on Monday vowed transparency and pledged to hold those found responsible accountable. Batts said the investigation will be completed by May 1 and the results will be sent to the state attorney’s office to determine whether criminal charges will be filed. Batts also said he is ordering that police review and rewrite “effective immediately” its policies on moving prisoners and providing them with medical attention.

Police on Monday also released a more detailed timeline of how Gray was arrested and transported.

It revealed for the first time that Gray was placed in leg irons after an officer felt he was becoming “irate” in the back of the transport van, and that the van made several stops on its way to the police station, even picking up another prisoner in an unrelated case, after Gray had asked for medical attention several times. Upon arrest, police said Gray asked for an inhaler and requested care several times before he was ultimately taken to the hospital.

“They were vague about how his spine was injured. We’ll have to wait to see the autopsy that they admitted they worked closely with the medical examiner’s office to develop,” Murphy said. “Who did it? How did they do it and why did they do it? Why all these stops? What were the police doing during those stops? What did they see?”