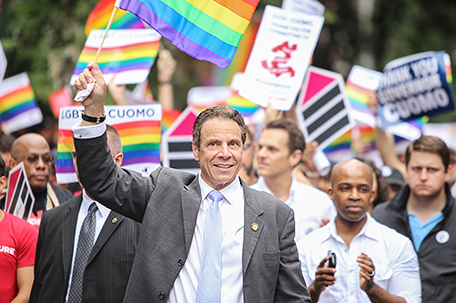 Legislation has been proposed in states across the country to protect those who – due to religious beliefs – decline to employ or serve certain people. Critics say the laws are aimed at the LGBT community and are discriminatory. Recent laws denounced as discriminatory in North Carolina and Mississippi has prompted a growing backlash from opponents. Several country music artists and songwriters have condemned proposed laws that critics say discriminate against LGBT people, but anyone looking for reaction from the record labels and production companies on Nashville’s Music Row has heard only the sound of silence.

New laws in North Carolina and Mississippi have drawn the ire of businesses and celebrities alike, with Bruce Springsteen and Bryan Adams canceling shows in those states. Legislation dealing with the treatment of gays, lesbians, bisexuals and transgender people was vetoed by Georgia’s governor, but bills are still being considered in Tennessee and South Carolina.

Numerous artists with ties to Nashville have denounced the proposals here, which would ban transgender people from using restrooms that don’t conform to their sex at birth and would allow counselors to refuse services to LGBT people on religious grounds. Among them: Emmylou Harris, Billy Ray Cyrus and his pop star daughter Miley Cyrus, and actor Chris Carmack of ABC’s “Nashville.” Here’s a look at legislation around the country:

Alabama lawmakers are considering a measure to prevent the state from refusing to license childcare service providers who decline services that conflict with their religious beliefs. Religious organizations contract with the state to provide some childcare services, and opponents of the proposal have argued that the bill could be used to exclude gay and lesbian couples from adopting children or being foster parents. The proposal comes after the U.S. Supreme Court unanimously struck down an Alabama Supreme Court order that invalidated a lesbian couple’s adoption in Georgia.

Arkansas lawmakers last year approved a revised version of a religious objections measure after the initial version faced widespread criticism that it was anti-LGBT. The Legislature also enacted a law aimed at preventing cities and counties from passing anti-discrimination measures that include sexual orientation or gender identity.

Colorado lawmakers introduced a bill in February that would have blocked the state from taking any action that may burden a person’s religious freedom unless it was the least restrictive means of furthering a compelling governmental interest. A House committee indefinitely postponed discussion on the bill.

Republican Gov. Rick Scott signed a law stating that clergy, churches, religious schools and other religious organizations cannot be required to marry people or allow their facilities to be used for marriage celebrations that violate “a sincerely held religious belief.” The law takes effect July 1.

Republican Gov. Nathan Deal vetoed a bill that would have prohibited the government from imposing penalties on religious schools and organizations that chose not to employ or serve people based on their sincerely held religious beliefs. The proposal would have also protected clergy who declined to perform weddings for gay and lesbian couples.

Hawaii lawmakers last January introduced legislation to prohibit the state from burdening any person’s right to exercise religion unless it was needed to further a compelling governmental interest. The bill was carried over to the 2016 regular session.

Lawmakers are considering legislation that would require school boards to designate separate boys and girls’ bathrooms, changing rooms and other facilities being used during school-sponsored activities. The legislature defines sex as a student’s gender at birth and not their gender identity.

A proposed bill to prohibit the government from substantially burdening a person’s exercise of religion similar to legislation being considered in many other states was introduced in the Iowa House of Representatives in January. The proposal has been referred to the judiciary committee.

A new law prevents colleges and universities from denying religious student associations the same funding or benefits available to other groups because of requirements that its members follow the association’s religious beliefs, standards or conduct. The law will take effect July. Bills were also introduced to order schools to designate restrooms, locker rooms and other facilities for use by males or females according to students’ gender at birth.

[Part two in next week’s issue of the SUN]