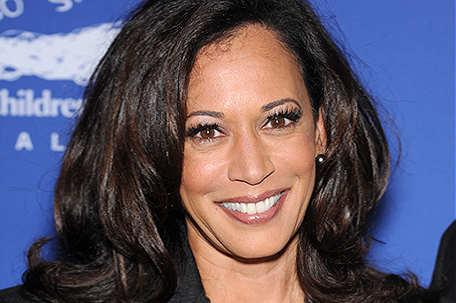 “I remember her saying to me, ‘They’re not going to let him win,’” Harris recalled. “She did not want to go to the caucuses. She didn’t want to be disappointed.”

For Harris, it was a revealing moment, one she says illustrated the limitations many Americans, including Black Americans, place on who is considered electable for the nation’s highest office.

Twelve years later, with American politics roiled by issues of race and gender, it’s Harris asking Americans to expand their definition of electability once again.

“Sometimes it takes awhile to get people to see that this is possible,” Harris said in an interview with The Associated Press in which she discussed race and her standing as the most viable Black woman to seek a major party’s presidential nomination.

The 54-year-old freshman senator from California is unabashedly and unapologetically embracing that role. She’s increasingly weaving her personal history into her campaign, including in a searing debate exchange last month with former Vice President Joe Biden over school busing. Her campaign was ready for the moment, quickly tweeting a photograph of Harris as a pig-tailed child, then selling T-shirts bearing the image.

As her place in the race has strengthened, Harris has found herself the target of smears about her citizenship and ethnicity, including by one of President Donald Trump’s sons, that echo the same lies and accusations Trump and others raised about Obama, the country’s first black president.

To Harris, it’s the cost of trying to break through long-standing barriers.

“When you break things, you get hurt, you bleed, you get cut,” Harris said. “When I made the decision to run, I fully appreciated that it will not be easy. But I know if I’m not on the stage, there’s a certain voice that will not be present on that stage. Knowing that there is a perspective, there is a life experience, there is a vision that must be heard and seen and present on that stage, and that I have an ability to do that.”

Harris, the daughter of an Indian American mother and Jamaican American father , entered the 2020 race with seemingly boundless potential: a compelling personal story and polished political pedigree; a prosecutor’s skill at taking on Trump’s record; and the prospect of drawing significant voting support from Black women, who are the backbone of the party.

But the opening months of Harris’ campaign have been uneven. She’s faced questions from liberals about her record as a prosecutor in California and has been criticized for appearing cautious and guarded. Her fundraising in the second quarter significantly lagged Biden and Pete Buttigieg, the mayor of South Bend, Indiana.

Harris has gained ground recently due to her debate performance, particularly her exchange over race with Biden. She condemned Biden for his comments about working with segregationists in his early years as a Delaware senator and for opposing federally mandated school busing in the 1970s, powerfully explaining that she was bused as a child. Biden appeared taken aback, and later said he wasn’t prepared for Harris’ attack.

Harris suggested he should have been.

“People want to ask what was going on on that stage. I was not going to stand there and let people rewrite history,” she said. “We can’t write the next chapter without remembering what was in the last chapter. This is not manufactured. It’s something that’s very much a part of my identity.”

The moment was striking, and not just because it dented Biden’s standing as a front-runner.

Harris’ approach and her willingness to raise on her own the deep scars of America’s history with race marked a shift from Obama’s first campaign, when he often campaigned as an almost post-racial figure. His most prominent comments on race as a candidate came when his hand was forced and questions were raised about his controversial pastor, Rev. Jeremiah Wright. Some Obama advisers worried at the time that the matter might sink his candidacy.

Obama, of course, went on to win two terms in the White House. But his victories did not quell America’s racial tensions; if anything, they flared anew during his tenure and have worsened under Trump’s presidency.

Harris has faced some of the same questions about her race and citizenship as Obama, prompting her rival campaigns to quickly leap to her defense, but also stirring doubts about whether America is really ready to elect a Black woman.

“She still has a lot more work to do assuring the American people,” said Linda Walters, a 55-year-old from Rock Hill, South Carolina, pointing to the questions about Harris’ background as proof. “It’s Barack all over again. Kamala is going to have to relieve some people of their fear.”

Harris acknowledged the sting of such comments, saying there are moments in the race that have been “very painful.”

“For me, it’s an affirmation of what a lot of us know, which is that there’s still a lot of educating to do about who we are,” she said, adding that she is loath to constantly be in position of doing that educating herself. “In my moments of fatigue with it all, I’m like, ‘Look, I’m not running to be a history professor.’”

Jill Louis, a Dallas attorney who was Harris’ sorority sister at Howard University, said questions about her electability say more about voters than Harris as a candidate.

“When women and people of color are ready to represent themselves, all they have to do is vote and it happens,” Louis said. “People are holding themselves back. The obstacle is people’s own disbelief in their own power.”

Last month, Harris stepped up her campaign outreach to Black voters, drawing particularly on her ties as a Howard graduate to Historically Black Colleges and the country’s influential nine Black fraternities and sororities. Privately, some of her advisers also acknowledge that, like with Obama in 2008, some Black voters will be watching to see if Harris can win over enough White Americans in early primary contests to prove her viability as a candidate.

Harris said she knows the skepticism about her candidacy, and the country’s willingness to embrace it, exist.

“There are always going to be doubters. That’s not new to me,” she said.

After her words hung in the air, the question came: “So how do you do it?”