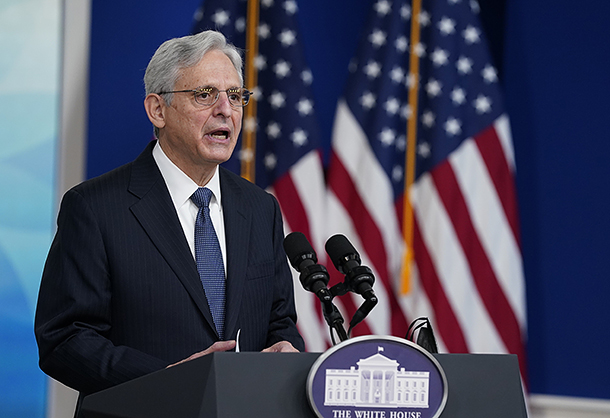 ABOVE PHOTO: Attorney General Merrick Garland speaks during a Tribal Nations Summit during Native American Heritage Month, in the South Court Auditorium on the White House campus, Nov. 15, 2021, in Washington. The Justice Department is giving $139 million to police departments across the U.S. as part of a grant program that would bring on more than 1,000 new officers. The grant funding being announced Thursday comes through the Justice Department’s Office of Community Oriented Policing Services and will be awarded to 183 law enforcement agencies. (AP Photo/Evan Vucci, File)

On Monday, U.S.Attorney General Merrick B. Garland announced the Department of Justice will award $1.6 billion in grant awards to support a wide range of programs designed to reduce violent crime and strengthen communities. The grants, which are being distributed to communities and organizations throughout the nation, are administered by the department’s Office of Justice Programs (OJP).

“The Department of Justice is committed to supporting our state and local partners to combat crime across the country,” Garland said. “This latest round of funding will deliver critical public safety resources, helping public safety professionals, victim service providers, local agencies and nonprofit organizations confront these serious challenges.”

As law enforcement agencies address a range of public safety challenges – from violent crime to human trafficking to retail thefts – these awards will provide additional tools to advance violence intervention activities and evidence-based police and prosecution strategies. Funds are also intended to reduce recidivism, help people coming out of prisons and jails make the transition back into their communities and support responses to crises like drug overdoses and episodes involving mental illness.

These grants build on earlier OJP investments, including more than $1.2 billion to support victim assistance and compensation programs, $187 million under the state formula Edward Byrne Memorial Justice Assistance Grants Program, more than $175 million in funding for victim services and public safety in American Indian and Alaska Native communities, over $21 million in grants to address hate crimes and $17.5 million in Project Safe Neighborhoods grants.

The COPS office also funded the hiring of over 1,000 officers in 183 police departments this year.

Some of the awards address the rise in gun violence and other violent crime in communities across America, in alignment with the Biden-Harris Administration’s commitment in April.

“These investments reflect a commitment that extends across this administration to invest in our neighborhoods, building bonds of civic trust and ending the cycle of trauma and violence that destroys too many lives and keeps far too many Americans from realizing their potential,” said Principal Deputy Assistant Attorney General Amy L. Solomon of OJP. A full list of awards, as they are made, will be available on the OJP Grant Awards page.

The Office of Justice Programs provide federal leadership, grants, training, technical assistance and other resources to improve the nation’s capacity to prevent and reduce crime, advance racial equity in the administration of justice, assist victims and enhance the rule of law. More information about OJP and its components can be found at: www.ojp.gov.