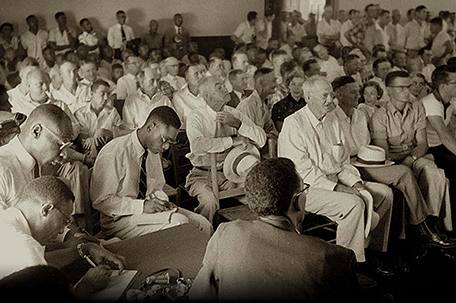 The U.S. Department of Justice has shut down its investigation into the Emmett Till slaying, closing the door on possible charges.

Documentary filmmaker Keith Beauchamp, who has worked closely with the FBI on the case, said the department has “not publicly stated the case is closed, but it’s closed.”

There are no indications the state of Mississippi will pursue a murder charge in the death of the 14-year-old African-American youth from Chicago, which took place 65 years ago today. In 2007, a Mississippi grand jury declined to bring charges.

Asked about the Till case, all District Attorney W. Dewayne Richardson of Greenville would say is “I don’t have anything to report.”

Family members and supporters continue to push for the prosecution of the lone living suspect in the case, 86-year-old Carolyn Bryant Donham, collecting more than 3,600 signatures of support.

“Justice for Emmett Till is prosecuting her,” said his cousin, Deborah Watts, co-founder and executive director of the Emmett Till Legacy Foundation.

On Aug. 28, 1955, Till was tortured and killed inside a dark barn on a plantation near Drew. Those who lived or worked nearby heard his cries and saw one of the killers, Roy Bryant’s half-brother, J.W. Milam.

After Bryant’s arrest, Donham told his lawyer that Till had grabbed her hand and asked her for a date.

Three weeks later, she testified under oath at trial, giving a much different version. With the jury out, she claimed Till grabbed her by the waist with both hands and told her he had had sex with white women before.

The all-white, all-male jury acquitted Bryant and Milam in the murder. Months later, they admitted their involvement in the killing.

Till’s cousins have long disputed Donham’s claims, saying they were inside the store, too, and saw no such thing.

In 2004, one of those cousins, Simeon Wright, along with Beauchamp and activist Alvin Sykes, helped convince the Justice Department to reinvestigate the case.

During that probe, Donham told FBI agent Dale Killinger that Till “accosted” her and that she screamed for her sister-in-law, Juanita Milam, who was in back.

But Juanita Milam told the FBI that she wasn’t there that day.

Federal prosecutors considered charging Donham with lying to an FBI agent, but ultimately decided to let the case go instead to a Mississippi grand jury.

In his 2017 book, The Blood of Emmett Till, author Timothy Tyson wrote that Donham recanted the story she told at trial, saying the part about her testimony that Till had grabbed her around the waist and uttered obscenities wasn’t true.

He quoted Donham as saying, “Nothing that boy did could ever justify what happened to him.”

(Donham’s family has denied she recanted.)

After this revelation, the FBI reopened the case a second time.

Watts said she and other members of the Till family don’t believe it’s too late for justice.