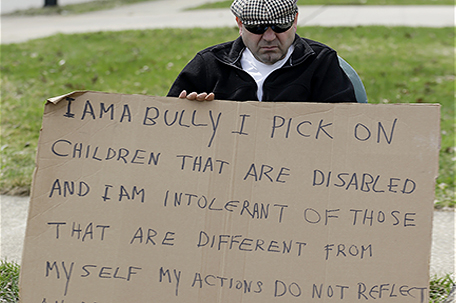 ABOVE PHOTO:  Edmond Aviv sits on a street corner holding a sign Sunday, April 13, 2014, in South Euclid, Ohio declaring he’s a bully, a requirement of his sentence because he was accused of harassing a neighbor and her disabled children for the past 15 years. Municipal Court Judge Gayle Williams-Byers ordered Aviv, 62, to display the sign for five hours Sunday. It says: “I AM A BULLY! I pick on children that are disabled, and I am intolerant of those that are different from myself. My actions do not reflect an appreciation for the diverse South Euclid community that I live in.”   (AP Photo/Tony Dejak)

SOUTH EUCLID, Ohio – An Ohio man who spent hours on a street corner Sunday with a sign declaring he’s a bully says that the punishment in a disorderly conduct case was unfair and that the judge who sentenced him has ruined his life.

Edmond Aviv, 62, mostly ignored honking horns and people who stopped by to talk with him in South Euclid, the Northeast Ohio Media Group reported.

“The judge destroyed me,” Aviv said. “This isn’t fair at all.”

The sentence stemmed from a neighborhood dispute in which a woman said Aviv had bullied her and her disabled children for years. Aviv pleaded no contest to a misdemeanor disorderly conduct charge, and Municipal Court Judge Gayle Williams-Byers ordered him to display the sign for five hours Sunday as part of his sentence.

The judge selected the wording for it: “I AM A BULLY! I pick on children that are disabled, and I am intolerant of those that are different from myself. My actions do not reflect an appreciation for the diverse South Euclid community that I live in.” 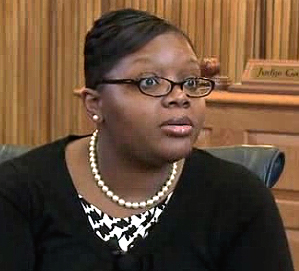 Aviv arrived at the corner with the sign just before 9 AM Sunday. Within a couple of minutes, a passing motorist honked a car horn. Later in the morning, he was sitting in a chair holding the hand-lettered sign in front of him.

Dozens of drivers honked their horns and some passers-by yelled at him. Some pedestrians took pictures.

Aviv denied bullying his neighbors, but declined to answer other questions. A court probation officer monitored him, and Aviv’s attorney stopped by to check on him. The lawyer didn’t immediately return telephone calls to his office Sunday.

Aviv has feuded with his neighbor Sandra Prugh for the past 15 years, court records show. The most recent case stemmed from Aviv being annoyed at the smell coming from Prugh’s dryer vent when she did laundry, according to the records. In retaliation, Aviv hooked up kerosene to a fan, which blew the smell onto Pugh’s property, the records said.

Prugh has two adult adopted children with developmental disabilities, cerebral palsy and epilepsy. Her husband has dementia, and her son is paralyzed.

Prugh said in a letter to the court that Aviv had called her an ethnic slur while she was holding her adopted African American children, spit on her several times, regularly threw dog feces on her son’s car windshield, and once smeared feces on a wheelchair ramp.

“I am very concerned for the safety of our family,” Prugh wrote in a letter to the court for Aviv’s sentencing. She said she just wants to live in peace.

The judge also ordered Aviv to serve 15 days in jail and undergo anger management classes and counseling. Aviv also had to submit an apology letter to Prugh.

“I want to express my sincere apology for acting irrationally towards your house and the safety of your children,” Aviv wrote. “I understand my actions could have caused harm but at that time I was not really thinking about it.”