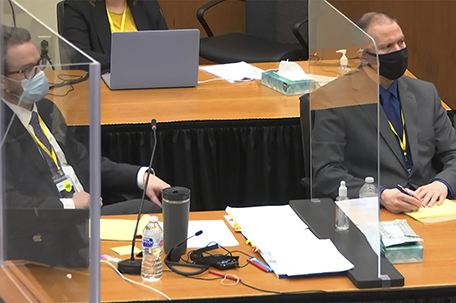 ABOVE PHOTO: In this image taken from video, defense attorney Eric Nelson, left, and defendant former Minneapolis police officer Derek Chauvin listen as Hennepin County Judge Peter Cahill presides over jury selection, Wednesday, March 10, 2021, at the Hennepin County Courthouse in Minneapolis, Minn., in the trial of Chauvin, who is accused in the May 25, 2020, death of George Floyd. (Court TV/Pool via AP)

By Steve Karnowski And Amy Forliti

MINNEAPOLIS (AP) — A judge on Thursday granted prosecutors’ request to add a third-degree murder count against a former Minneapolis police officer charged in George Floyd’s death, offering jurors an additional option for conviction and resolving an issue that might have delayed his trial for months.

Hennepin County Judge Peter Cahill reinstated the charge after the former officer, Derek Chauvin, failed to get appellate courts to block it. Cahill had earlier rejected the charge as not warranted by the circumstances of Floyd’s death, but an appellate court ruling in an unrelated case established new grounds.

The dispute over the third-degree murder charge revolved around wording in the law that references an act “eminently dangerous to others.” Cahill’s initial decision to dismiss the charge noted that Chauvin’s conduct might be construed as not dangerous to anyone but Floyd.

Jury selection continued for the second day in Derek Chauvin’s trial as the Minnesota Supreme Court declined Wednesday to hear his appeal to block a third-degree murder charge from being reinstated in George Floyd’s death. (March 10)

But prosecutors sought to revive the charge after the state’s Court of Appeals recently upheld the third-degree murder conviction of another former Minneapolis police officer in the 2017 killing of an Australian woman. They argued that the ruling established precedent that the charge could be brought even in a case where only a single person is endangered.

Arguments over when the precedent from former officer Mohamed Noor’s case took effect went swiftly to the state’s Supreme Court, which on Wednesday said it would not consider Chauvin’s appeal. Cahill said Thursday that he accepts that precedent has been clearly established.

“I feel bound by that and I feel it would be an abuse of discretion not to grant the motion,” he said.

Floyd was declared dead on May 25 after Chauvin, who is white, pressed his knee against the Black man’s neck for about nine minutes. Floyd’s death sparked sometimes violent protests in Minneapolis and beyond, leading to a nationwide reckoning on race.

Jury selection resumed Thursday for the third day as attorneys grappled further with the challenges of seating an impartial and diverse jury in such a high-profile case. The jury by mid-afternoon Thursday included five men and one woman. Cahill said three are white, one is multiracial, one is Hispanic and one is Black.

The sole juror picked Thursday morning described himself as an outgoing, family-oriented soccer fan, for whom the prospect of the trial was “kind of exciting.”

The man, who said his favorite team is the Spanish powerhouse Real Madrid, said he’s also a fan of true crime podcasts and TV shows. He acknowledged under questioning from defense attorney Eric Nelson that he had a “very negative” impression of Chauvin. The man wrote on his questionnaire that he had seen the widely viewed bystander video of Floyd “desperately screaming that he couldn’t breathe” even as other officers stood by and bystanders shouted that Chauvin was killing Floyd.

At Chauvin trial, some in jury pool have sharp views on case

Yet asked whether he could set his opinions aside and stick to the evidence presented in court, he replied: “I’m willing to see all the evidence and everything, hear witnesses.”

Several other candidates were dismissed, including a woman who said she “can’t unsee the video” of Chauvin pinning Floyd, and a man who said he has doubts about Black Lives Matter and the way the group pursues its goals.

Nelson pressed the woman hard on her ability to be fair despite her strong opinions.

Asked how the events of last summer had affected the community, she replied: “Negatively affected because a life was taken. Positively because a movement has come from it and the whole world knows.” Asked about the property damage during the unrest, she said, ”I felt that was what needed to happen to bring this to the world’s attention.”

“Looking in your heart and looking in your mind can you assure us you can set all of that aside, all of that, and focus only on the evidence that is presented in this courtroom?” Nelson asked.

“I can assure you, but like you mentioned earlier, the video is going to be a big part of the evidence and there’s no changing my mind about that,” she replied.

Cahill dismissed her for cause, sparing Nelson from having to use one of his peremptory strikes. Prosecutor Steve Schleicher objected, saying she might have been subjected to harder questioning than other potential jurors.

At least three weeks have been set aside to complete a jury of 12 plus two alternates. Potential jurors’ identities are being protected and they are not shown on livestreamed video of the proceedings.

Chauvin and three other officers were fired. The others face an August trial on aiding and abetting charges. The defense hasn’t said whether Chauvin will testify in his own defense.