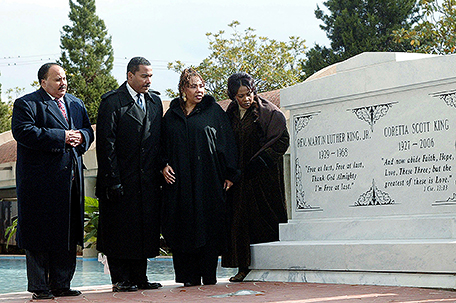 ABOVE PHOTO:  In this file photo taken in 2006 the children of the Rev. Martin Luther King Jr. and Coretta Scott King from left, Martin Luther King III, Dexter King, the late Yolanda King and Bernice King stand next to a new crypt dedicated to their parents in Atlanta. Bernice is in a legal battle with her brothers over their father’s Bible and Nobel Peace Prize medal.  (AP Photo/W.A. Harewood, File)

ATLANTA — A judge has ruled that a lawyer for the estate of Martin Luther King Jr. cannot participate in a dispute over the ownership of King’s Bible and Nobel Peace Prize.

The slain civil rights icon’s estate, controlled by his sons, is locked in a legal dispute with his daughter, the Rev. Bernice King, over ownership of the items. The Martin Luther King Jr. Estate Inc., which is run by Martin Luther King III and Dexter Scott King, wants to sell the items, while Bernice is opposed to the sale.

The Bible and peace prize medal are being held in a safe deposit box controlled by the court pending the outcome of the dispute.

Bernice’s lawyers had asked Fulton County Superior Judge Robert McBurney to disqualify the estate’s lawyer, William Hill, and his law firm because he was appointed by another judge to help resolve a similar 2008 dispute between the King children and the entities they control.

Lawyers for both sides did not immediately respond to emails from The Associated Press seeking comment Monday morning. Hill told the Daily Report that he and his client hadn’t decided whether to challenge the order, while Bernice King’s lawyer, Eric Barnum, told the newspaper the order “speaks for itself.”