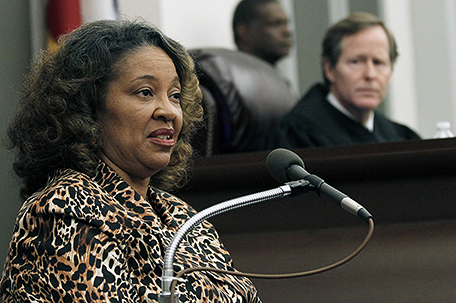 JACKSON, Miss. — A judge Monday ordered four white men convicted in the June 2011 beating and rundown death of a black autoworker in Mississippi to pay his heirs $840,000. 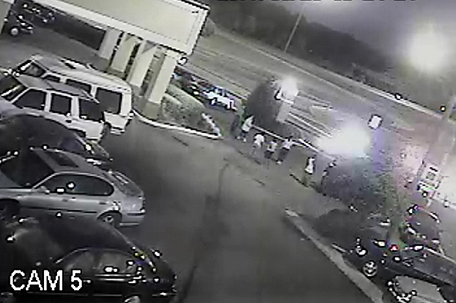 In this June 26, 2011 frame grab from a security video, people gather in a parking lot next to the Jackson, Miss., street where James Craig Anderson, a 49-year-old black man was allegedly run down by a pickup truck driven by Deryl Dedmon, a white teen. At least one of the four people indicted in a series of racial beatings of blacks is in talks with prosecutors about pleading guilty. Tom Fortner, the lawyer for Sarah Adeila Graves, said Friday, Dec. 5, 2014 that plea talks are at a “critical” stage and could be resolved within the next several weeks. Six men pleaded guilty earlier in the investigation, sparked after James Craig Anderson was run over by a truck and died in June 2011. (AP Photo)

Anderson’s death came on the last of a series of forays to what the group called “Jafrica” – a combination of Jackson and Africa – to assault black people. It ended in a hotel parking lot where the group spotted Anderson, who appeared to be intoxicated. Rice and Dedmon beat Anderson as Butler, Montgomery and others watched. As Dedmon left in his truck, he ran over Anderson, inflicting fatal injuries recorded on a hotel security camera.

All four pleaded guilty to federal conspiracy and hate crime charges, and the earliest is scheduled to be released in 2018. The men share the liability, but each could be required to pay the whole amount if others make no contributions.

Dedmon was also convicted in a Mississippi state court in 2012 on counts of capital murder and hate crime, receiving two life sentences in state prison.

“Although no amount of money will ever be able to account for the true value of James Craig Anderson’s life, we hope that this restitution will help ease the burden on his family,” Gupta said in a statement.

Defense attorneys and federal prosecutors agreed to the amount, saying that was how much Anderson was expected to earn over the rest of his life. Separate reports commissioned by prosecutors and Brumley, a federal public defender representing Butler, attempted to estimate the amount. Reeves sealed the reports, so it’s unclear by how much they differed.

Three people sentenced by another judge also face a restitution hearing. Brumley said the government is likely to seek that they be included in the same amount.

Two other men convicted of assaulting other African-Americans – Joseph Paul Dominick and Jonathan Kyle Gaskamp – won’t have to pay restitution because the government has never found their victims, prosecutor Sheldon Beer told Reeves.