Jesse Jackson and wife remain under observation for COVID-19 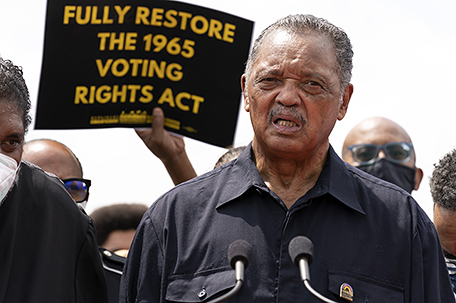 ABOVE PHOTO: Rev. Jesse Jackson speaks to the crowd during a demonstration supporting the voting rights, on Capitol Hill, in Washington. The Rev. Jesse Jackson and his wife, Jacqueline, have been hospitalized after testing positive for COVID-19 according to a statement Saturday, Aug. 21, 2021. He is vaccinated against the virus and publicly received his first dose in January. According to a statement released Saturday evening, the Jacksons are being treated at Northwestern Memorial Hospital in Chicago. He is 79 years old. Jacqueline Jackson is 77. (AP Photo/Jose Luis Magana, File)

CHICAGO — The Rev. Jesse Jackson, and his wife, Jacqueline, remained under doctors’ observation Sunday at a Chicago hospital and were “responding positively to treatments’’ for COVID-19, their son told The Associated Press.

The couple, married for nearly six decades, were admitted to Northwestern Memorial Hospital a day earlier. Physicians were ‘carefully monitoring their condition’’ because of their ages, Jonathan Jackson, one of the couple’s five children, said in a statement.

“Both are resting comfortably and are responding positively to their treatments,” Jonathan Jackson said. “My family appreciates all of the expressions of concern and prayers that have been offered on their behalf, and we will continue to offer our prayers for your family as well.’’

Jesse Jackson, a Chicago civil rights leader, is vaccinated against the virus and received his first dose in January during a publicized event as he urged others to receive the inoculation as soon as possible. The vaccination status of his wife, who is also an activist, was unclear. Family members said she has an unspecified underlying health condition that triggered concerns in recent days.

“We ask that you continue to pray for the full recovery of our parents. We will continue to update you on a regular basis,’’ Jonathan Jackson said.  Jesse Jackson, who has Parkinson’s disease, was hospitalized earlier this year for an unrelated gallbladder surgery.

A mentee of the Rev. Martin Luther King, he was crucial in guiding the modern civil rights movement on numerous issues, including voting rights. Despite his Parkinson’s diagnosis, Jackson has stayed active and continued to travel, even during the pandemic.

In recent weeks he has been arrested for civil disobedience, including last month during a sit-in at the Phoenix office of Democratic U.S. Sen. Kyrsten Sinema, who has faced pressure over her opposition to ending the filibuster to pass voting rights legislation.

A Northwestern spokesman did not have further information.