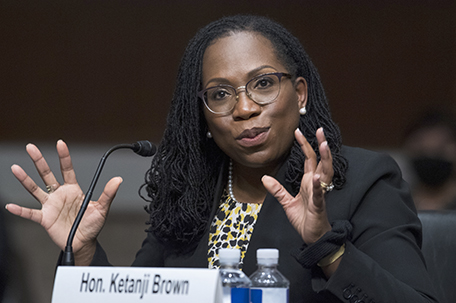 ABOVE PHOTO: Ketanji Brown Jackson, nominated to be a U.S. Circuit Judge for the District of Columbia Circuit, testifies before a Senate Judiciary Committee hearing on pending judicial nominations, Wednesday, April 28, 2021 on Capitol Hill in Washington. (Tom Williams/Pool via AP)

By Jessica Gresko and Mark Sherman

WASHINGTON — When Ketanji Brown Jackson’s younger daughter was 11, she drafted a letter to the president suggesting her federal judge-mom for a vacancy on the Supreme Court.

“Dear Mr. President,” Leila Jackson wrote. “She’s determined, honest and never breaks a promise to anyone even if there are other things she’d rather do. She can demonstrate commitment and is loyal and never brags. I think she would make a great Supreme Court justice.”

Jackson wasn’t nominated for the vacancy her daughter was writing about, one created by the 2016 death of Justice Antonin Scalia. And Republican lawmakers blocked then-President Barack Obama’s ultimate nominee, Merrick Garland, who is now President Joe Biden’s attorney general.

She is considered to be among the top prospects to replace retiring justice Stephen Breyer as Biden seeks to fulfill a campaign pledge to nominate the first Black woman to the court.

Jackson talked about her daughter’s letter in a 2017 speech. She said the letter came about after her daughter learned there was a high court opening and thought her mom should apply.

“Getting to be on the Supreme Court isn’t really the kind of job that you apply for,” she and her husband explained to their daughter.

Jackson has a background similar to justices on the court and had attracted Obama’s attention as a possible nominee in 2016. She went to college and law school at Harvard. She also spent a year early in her career serving as a law clerk to Breyer.

Her experience as a public defender could set her apart, especially because Biden has prized criminal defense and civil rights work in other people he has nominated for federal judgeships.

Jackson is on the U.S. Court of Appeals for the District of Columbia Circuit, a position Biden elevated her to last year from her previous job as a federal trial court judge. Three current justices — Brett Kavanaugh, Clarence Thomas and John Roberts, the chief justice — previously served on the same appeals court.

Jackson was confirmed to the appeals court by a 53-44 vote, winning the backing of three Republicans: South Carolina’s Lindsey Graham, Maine’s Susan Collins, and Alaska’s Lisa Murkowski. That could be important to Biden, who has been reaching out for GOP support as he chooses a nominee. Another GOP connection: Jackson is related by marriage to former House Speaker Paul Ryan, R-Wis.

Jackson was born in Washington, D.C., but grew up in Miami. She has said that her parents, Johnny and Ellery Brown, chose her name to express their pride in her family’s African ancestry. They asked an aunt who was in the Peace Corps in Africa at the time to send a list of African girl’s names and they picked Ketanji Onyika, which they were told meant “lovely one.”

She traces her interest in the law to when she was in preschool and her father was in law school and they would sit together at the dining room table, she with coloring books and he with law books.

Her father became an attorney for the county school board and her mom was a high school principal. She has a brother who is nine years younger who served in the Army, including in Iraq, and is now a lawyer.

In high school, she was the president of her public high school class and a debate champion. Richard B. Rosenthal, a lawyer who has known her since junior high, said there was no question she would rise to the top of whatever field she chose, describing her as “destined for greatness.”

His older brother, Stephen F. Rosenthal, a classmate, and friend from Miami who also went to college and law school with her, called her a “natural leader” and someone with “penetrating intelligence.”

At Harvard she studied government but also was involved in drama and musical theater and part of an improv group called On Thin Ice. At one point she was assigned actor Matt Damon as a drama class partner, she has said, acknowledging he probably wouldn’t remember her. He does not, Damon confirmed through a representative, but added: “That’s so cool!”

Also, at Harvard she met her husband, Patrick Jackson. The couple has two daughters, the letter-writer Leila, who is in high school, and her older sister, Talia, who is in college.

Patrick Jackson, a surgeon, has a Twitter account that sticks almost exclusively to medicine. But on June 12 in a tweet that has since apparently been removed he posted to note an important legal date. It was the anniversary of the Supreme Court’s Loving v. Virginia decision that struck down interracial marriage bans.

“Happy Loving Day! I am especially thankful to be walking through life with a brilliant and compassionate partner who still takes my breath away, made possible by sacrifices like Richard and Mildred Loving,” Jackson wrote, adding a photo of himself and his wife.

“I don’t know anybody there at the time who didn’t get along with Ketanji,” Pearlstein said.

Over the course of her career since, Jackson has worked for large law firms but also was a public defender. After she was nominated to serve on the U.S. Sentencing Commission, the agency that develops federal sentencing policy, she taught herself to knit to deal with the stress of the nomination and confirmation process, she has said. As a commissioner, she was part of a unanimous vote to allow thousands of people already in federal prison for crack-related crimes get their sentences reduced as a result of a new law.

Prison isn’t a distant concept for Jackson. Her uncle was serving a life sentence for a drug-related crime until it was commuted by Obama, according to a detailed account in The Washington Post.

Jackson’s work on the Sentencing Commission paved the way for her to become a federal judge, where one of the things she displayed in her office was a copy of a famous, handwritten petition to the Supreme Court from a Florida prisoner, Clarence Gideon. The Supreme Court took his case and issued a landmark decision guaranteeing a lawyer for criminal defendants who are too poor to afford one.

In one of her most high-profile decisions, she ordered former White House counsel Don McGahn to appear before Congress. It was a setback to former President Donald Trump’s effort to keep his top aides from testifying.

The case was appealed, and a deal was ultimately reached for McGahn’s testimony.

Another highly visible case Jackson oversaw involved the online conspiracy theory “Pizzagate,” unfounded internet rumors about prominent Democrats harboring child sex slaves at a Washington pizza restaurant. A North Carolina man showed up at the restaurant with an AR-15 assault rifle and a revolver. Jackson called it “sheer luck” no one was injured and sentenced him to four years in prison.

Jackson has a considerably shorter record as an appeals court judge.

Her first opinion, written for a unanimous three-judge panel in favor of labor unions, came out in recent days. In earlier votes she joined colleagues in declining to stop the Biden administration from enforcing a freeze on evictions put in place during the coronavirus pandemic and ruled against an effort by Trump to shield documents from the House committee investigating the Jan. 6 insurrection at the Capitol.

Those decisions were appealed to the Supreme Court and the justices allowed evictions to resume, but also allowed the documents’ release.

As far as the current Supreme Court opening, in addition to the endorsement of her daughter, Jackson has also had the endorsement of the man she would replace. When officials called Breyer in the course of her original nomination to be a federal judge, Breyer reportedly picked up the phone and started the conversation with two words: “Hire her.”

A look at high court’s top cases in new term