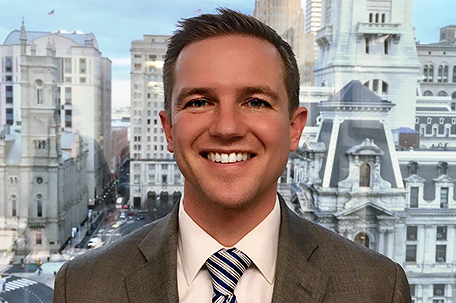 O’Neill entered the District Attorney’s race as a bit of an unknown. But he believes that his experience should make up for that.

By the time that District Attorney R. Seth Williams announced that he wouldn’t be seeking re-election, the race to succeed him on the Democratic ticket was already five people large.

That number grew to six when Tariq El-Shabazz, one of Williams’s former deputies, resigned his office and entered the race. For about a month, it looked like the race was set.

But on petition turn-in day in March, Jack O’Neill became the seventh name on the Democrat’s District Attorney ballot. While it looked like a last-minute decision on his part, it wasn’t.

He just wanted to make sure that the race was focused on the right things, O’Neill said. While there was no way that Williams — and the 23-count federal indictment he currently facing — wasn’t going to come up during the campaign, he wasn’t interested in participating in a Williams bashing contest.

“My waiting to enter the race had to do with [Williams],” he said. “I wanted to run a campaign based on who could do the job, who could best improve the office and who could best expand the reforms we were already making. I sincerely believed that if I was running against [Williams], the race was going to be about him and his personal problems.”

O’Neill is a graduate of Rutgers University and went to law school at the Florida State University School of Law and Oxford University. From law school, O’Neill joined the District Attorney’s office, where he worked as a prosecutor in the Special Victims and Homicide units for ten years.

As part of the SUN’s continuing series on the candidates for District Attorney, we talked to O’Neill about his vision for the District Attorney’s office, how to restore the morale of an office that has been in the spotlight for all of the wrong reasons, and how the 2016 Presidential Election influenced his decision to run.

SUN: First of all, thank you for giving us some of your time today, Mr. O’Neill. I guess that my first question for you is, what made you decide to run?

JO: I decided to run because I have a belief that I can do the job better than anyone else. I got to the point that I felt my experience gave me what I needed to run the place. I felt called to it because I have a commitment to Philadelphia and the people of Philadelphia. The District Attorney’s office is a part of me. I want to go into work every day and stand up for victims.

SUN: Unlike almost all your opponents, no one knew that you were running for DA until you turned in your nomination petitions in March. You mentioned that the reason you did this was that you wanted to make sure that the race focused on the issues. Can you elaborate a little bit on that?

JO: Having been in the office for most of what was going on with [Williams], I saw how it hurt the office and how it left those working there demoralized. That’s bad for the city and shakes people’s faith in the Criminal Justice system. I wanted to be a District Attorney who ran on what I’m running on, which is that I’m the most experienced person in this race. I didn’t want it to be like the national campaigns. I didn’t want to wage a personal attack campaign. I didn’t want to just run saying [Williams] was a bad person. I wanted to stick to issues.

When the campaigns are so focused on personal attack, it doesn’t do any good for the electorate. It’s not what the people want.

SUN: What do you see as the biggest challenge you’ll face if elected DA?

JO: The biggest challenge of being DA is knowing that you need to implement a lot of effective, creative, well managed diversionary and reform programs while recognizing a big piece of the DA’s job is prosecuting crime. It’s a double-edged sword.

On the one hand, you’ve got to be effective in making sure that people who get arrested due to drugs get drug treatment and people who commit crimes due to a lack of opportunities get drug treatment and job training instead of jail while making sure that people who assault little children and commit other kinds of heinous crimes go to jail. You have to have the ability to present a message to your assistants that while you’re going to be a human being and be progressive about a lot of things, we’re going to make sure that if you do something like kill a child, you’re going away for a very long time. That’s where I think the challenge is.

SUN: You’re one of two people who has seen recent time in the DA’s office. Because of this, you know the people that you’ll be working with if you win. Do you think that these relationships give you an advantage?

JO: I think it’ll be a huge advantage. I’ll know what those people are good at and what their strengths and weaknesses are. Some of them, I have managed before. I’ve led by example and have had a lot of support. I have always been someone that the people in the office could go to for advice and leadership because I was a lead prosecutor and one of the top people in the office. Due to my record and the things I’ve accomplished, I think that it would be a smooth transition.

SUN: One of the more consistent issues that the District Attorney’s office will have to deal with is the issue of police brutality, specifically police being prosecuted for abusing citizens. How would you deal with this issue?

JO: My record regarding police brutality is one of the things that I’m really proud of. We have almost 7,000 members of the Philadelphia Police Department, and most of them are good people. But I have prosecuted police officers that have done bad things like sexual assaults, rapes, and homicides. Whenever you have a police officer that commits a crime, you prosecute them for it. I’ve never backed down from prosecuting police officers.

When it comes to police brutality, the fact that many of these things are being caught on tape is a strong thing moving forward for the city. People can see exactly what happened and why this officer is being prosecuted. I’m looking forward to rebuilding the confidence that people have in the DA’s office to prosecute these cases.

SUN: There’s a lot of discussion throughout the race on whether or not the DA is overcharging defendants. Please explain what that means. And if you’re elected, how would you fix that?

JO: The Charging Unit determines what to charge someone with. The way this works is, police officers and detectives put the paperwork together after they arrest someone and recommend what the charges should be to the DA. For years, you were better off overcharging than undercharging. But we’ve since figured out that this was unnecessary and unfair because these more serious charges were used as leverage to make people take a plea. [Williams] saw that this was being done more than necessary and tried to fix it by putting more experienced attorneys in the Charging Unit.

This was one of those reforms that kind of lost steam, that didn’t go as far as it needed to. I think that we should put experienced DA’s in that unit, but that we should also review their work. That way, if the percentage of overcharging is still high, we’ll see that we have a problem and make the needed changes.

SUN: Another issue that has come up a lot during the campaign is the issue of cash bail. A lot of people are staying in jail unnecessarily because they don’t have the money to make bail due to a lack of resources. What would you do about that if you’re elected?

Bail reform needs to happen. We’ve seen clear examples of how to do this effectively. In 1992, Washington, D.C. started day reporting centers for people who were awaiting trial. It’s a good thing, and Philadelphia started to try and do it, but it takes a while, and it takes a lot of money to implement.

There are also other programs. For example, here’s early bail review. If someone is arrested on a low-level crime and is given bail, and is still in jail after two days, we check to see if the person doesn’t have the money. If that’s the case, we can lower the bail.

But if you’re going to do bail reform, you also have to do detainer reform. A detainer is what a judge gives someone when they’ve committed a crime, and they’re under supervision. If someone gets arrested on, say, retail theft, and they’re let out, they’re on probation for nine months. If they do something within that time, the judge will lodge a detainer, and they’ll have to sit in jail and wait for their next case to come up. But while they’re doing that, they’re not getting diversionary programs or the rehab that they need.

We need bail reform, but we need to do it in a way that’s tailored to Philadelphia. It has to be our solution to our problem. The people who are working through the McArthur grant have been doing a great job. But we can keep another 2,000 people out of jail if we reform detainer programs.

SUN: This is your first political race. What has that been like for you? Had you ever been involved in politics before?

JO: I didn’t leave the District Attorney’s office until last year, so I couldn’t be involved in politics. But it’s been really great, and while I know that people are really cynical about politics, I’m really glad that I took a shot at it. What’s been amazing about this has been all of the support I’ve gotten and the organizations endorsing me.

Running for office has made me believe that maybe we ought to believe in ourselves as a city a little more. I didn’t have any money and I have no political friends or family. Yet, I’ve managed to run on a campaign based on the fact that I think that I can do this the best of anyone. I’ve had labor endorsements, endorsements from elected officials and ward leaders, and I’m doing very well.

I am going to win this election based on being the most experienced and qualified and if that happens, it’s a great thing. It’ll mean that the way we do things politically isn’t as broken as everybody thinks.

SUN: Well, thanks so much for taking the time out to talk to me, Mr. O’Neill. I really appreciate it.