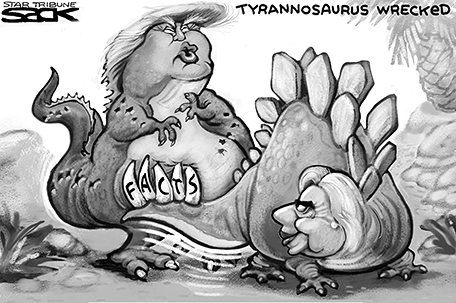 When I was a kid, my grandparents lived with us.

In addition to the news, cartoons on WPHL-17, soap operas like “Another World” and game shows like “The Price is Right” and “Match Game”, there were two television shows that my grandparents (and by extension my brothers and I) really got into: wrestling (Capt. Lou Albano, Andre the Giant and Mr. Fuji and Haystacks Calhoun were particular favorites), and the roller derby.

(Yeah, we were into gratuitous cartoon violence. We’d watch “The Three Stooges” too. What of it?!)

While we were discouraged from trying wrestling or roller derby moves at home, that didn’t stop us kids. Back in the day, folks would attempt the occasional pile driver. It didn’t end well, usually, but folks gave it a shot.

I thought about this on the bus I took to New York for the first debate of the 2016 Presidential Campaign on Monday. While looking through the hashtag #debatenight, I noticed that for a lot of people, the face-off between Democratic Presidential candidate Hillary Clinton and Republican Presidential candidate Donald Trump was the political version of Wrestlemania.

“I wanna see her bring him down!”

In a way, that’s kind of what happened. People dove off of figurative turnbuckles. Rhetorical figure-four leg locks were employed. Someone tried a clothesline in the end.

That’s satisfying in a wrestling match. For undecided voters seeking insight, not so much.

Now part of the reason why I applied for a credential for this particular round of verbal fisticuffs was because I wanted to see how “NBC Nightly News” anchor Lester Holt would handle the challenge of getting some straight answers from a woman who has a reputation of being guarded and a man who often conducts himself like a bull in a China shop.

He did what he could. And for a while, he was successful.

But it didn’t take long before I started to feel like it might be time to exchange Holt for The Rock because we went from debate stage to squared circle relatively quickly.

It started well enough. Holt began by asking Clinton if she felt she’d be better at improving the nation’s economy than her opponent.

In addition to calling for free college tuition, programs that help encourage a better work/life balance for workers, and mandating that the top one percent pay their fair share in taxes, Clinton called for economic equity.

“We have to make the economy fairer to everyone,” she said. “We need jobs that are an investment in the future. We need to raise the minimum wage. We need to have equal pay for women’s work. I also would like to see more businesses do profit sharing. And I would like to see businesses engage in profit sharing. If you help create the profit, you should be able to share in it, not just the executives at the top.”

Now, the way Clinton answered the question would indicate that she actually heard it.

“Jobs are fleeing the country,” he said beginning his treatise. “They’re going to Mexico and other countries and no one in our country can fight it. We’re losing our good jobs. Mexico is building some of the biggest plants. The United States? Not so much. We have to stop our jobs from being stolen. Ford is leaving. Other companies are leaving…”

If you’re saying to yourself, “That’s not what he asked”, don’t feel badly. You’re not alone. And I’m not even going to get into the fact that the Ford Motor Company told Trump that they weren’t leaving despite their investments in Mexico.

After the debate, Trump and many of his partisans asserted that Holt had it in for the Republican candidate because of how the debate was scored by many, including some Republicans.

But most of Trump’s wounds on Monday night were self-inflicted.

For example, if you’re running for president and someone accuses you of not paying your federal taxes, something that’s needed to pay the soldiers that you want to send into the Middle East to defeat ISIS, telling the world that you didn’t pay your taxes because you’re “smart” is a bad move.

If you’re trying to get people of color to consider voting for you, saying stuff like “African Americans and Hispanics are living in hell! You walk down the streets, you get shot”, while simultaneously debating the constitutionality of stop and frisk, isn’t going to get it done.

And I’m not even going to get into the sexism that’s all over the sentence “She doesn’t have the stamina to be president.”

Throughout the “Trump for President” campaign, I’ve wondered aloud about his communications staff. Considering some of the stuff that comes out of the candidate’s mouth, I have to believe that one of two things is going on: either the people he’s working with don’t know what they’re doing, or he’s just not listening to them.

As for the folks who did Trump’s debate prep, if he’s paid them $5, he’s paid too much.

(Considering the fact that several small businessmen have shared their stories of being stiffed by the billionaire developer, they probably shouldn’t bank on that $5.)

For her part, Clinton was prepared, and even had a zinger or two along the way. When Trump tried to knock her on that preparation, she basically thanked him.

“I think Donald just criticized me for preparing for this debate,” Clinton said. “And yes I did. And you know what else I prepared for? I prepared to be president. And I think that’s a good thing.”

She even created a meme when she shook her shoulders upon Trump announcing to the audience, “I think that my temperament is my strongest asset, maybe by far.”

So yeah, we got memes from that debate. We got missteps. We got the kind of debate that makes fact checkers want to hit the bar afterward.

But did you learn anything?

To be honest, I’d have to say no. Not really.

But you’re no closer to knowing what these folks would do when confronted with the myriad of issues that the President is faced with.

Hopefully, Martha Raddatz, chief global affairs correspondent and co-host of ABC’s “This Week” will have better luck getting those answers in the second debate.

Or at the very least, let’s hope she has the key to the steel cage.