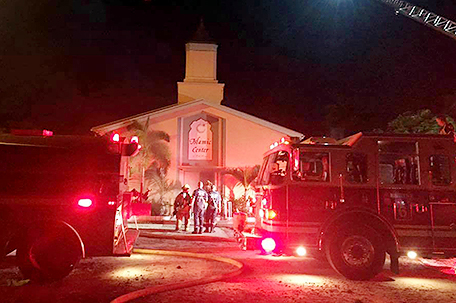 FORT PIERCE, Fla.  — The Islamic community says it will repair and reopen the arson-damaged Florida mosque that was occasionally attended by Orlando nightclub gunman Omar Mateen.

Hamaad Rahman, assistant imam of the Islamic Center of Fort Pierce, said the mosque’s approximately 100 members are “saddened and scared” by the fire, which was started late Sunday and burned for more than five hours before it was extinguished early Monday. The fire was started on the 15th anniversary of the Sept. 11 terrorist attacks and the start of the Muslim holiday Eid al-Adha.

The mosque has been subjected to more threats since June’s nightclub shooting than it did in its previous 20 years of existence, Rahman said.

Given the timing of the blaze, investigators believe it may have been a hate crime, St. Lucie County sheriff’s spokesman Maj. David Thompson said.

No one was injured. The fire burned a 10-by-10-foot hole in the roof at the back of the mosque’s main building and blackened its eaves with soot.

A surveillance video from the mosque showed a man on a Harley-Davidson type motorcycle approaching the building with a bottle of liquid and some papers, then leaving when there was a flash and shaking his hand as though he may have burned it, Thompson said. The first 911 calls were made about 45 minutes later after the fire had spread to the attic. It took about 4 1/2 hours for firefighters to extinguish the blaze. No one has claimed responsibility for the attack, he said.

The arsonist “is terrorizing our community because we don’t know where he is at and we don’t know what he is capable of doing,” said Wilfredo Amr Ruiz, Florida spokesman for the Council on American-Islamic Relations who was representing the mosque’s leadership.

Mateen opened fire at the Pulse nightclub June 12 in a rampage that left 49 victims dead and 53 wounded before the gunman was killed by police. He professed allegiance to the Islamic State group. His father is among roughly 100 people who attend the mosque.

Ruiz said the mosque and its worshippers have been harassed since the massacre.

“First there were threating voicemails,” he said. “Then drivers would splash water on the parishioners leaving on Fridays, and then a member got beat up in the parking lot when he came to the mosque for early morning prayers, and now the mosque has been set on fire.”

The FBI and the federal Bureau of Alcohol, Tobacco, Firearms and Explosives joined the investigation into the fire. Sheriff’s officials released the video and asked for the public’s help in identifying the arsonist.

Michael Parsons, 22, was standing outside his parents’ home, directly across the street from the mosque. He said that since the Orlando shooting, “a lot of people have been driving by hollering and yelling expletives at the church or mosque or whatever they call it.”

Parsons, a gutter installer with “trust no one” tattooed on his chest, said his mother’s cancer doctor attends the mosque.

“America was founded so people can believe what they want to believe and do what they want to do,” he said. “These guys flying the American flag on their trucks don’t really know what the freedom is they’re fighting for.”

On July 2, a few weeks after the nightclub massacre, a man was beaten outside the mosque. CAIR said the victim was a Muslim and the attacker hurled slurs. A suspect was arrested. CAIR said that earlier that day, a man in a truck stopped outside the mosque and said, “You Muslims need to get back to your country.”

On Monday morning, a pickup truck with a “Don’t Tread on Me” bumper sticker rolled past the mosque. The driver revved his engine and raised his index finger in the air as if making the gesture for No. 1.