Irma pushes Florida’s poor closer to the edge of ruin 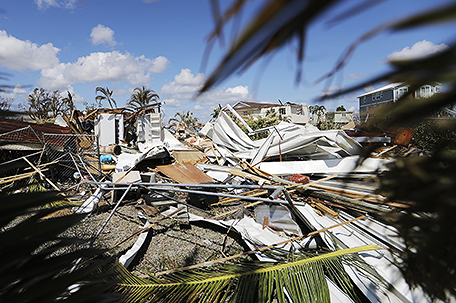 ABOVE PHOTO:  The remains of a house destroyed by Hurricane Irma are seen in Goodland, Fla., Tuesday, Sept. 12, 2017. (AP Photo/David Goldman)

IMMOKALEE, Fla.  — Larry and Elida Dimas didn’t have much to begin with, and Hurricane Irma left them with even less.

The storm peeled open the roof of the old mobile home where they live with their 18-year-old twins, and it destroyed another one they rented to migrant workers in Immokalee, one of Florida’s poorest communities. Someone from the government already has promised aid, but Dimas’ chin quivers at the thought of accepting it.

Dimas is one of millions of Floridians who live in poverty, and an untold number of them have seen their lives up-ended by Irma. Their options, already limited, were narrowed even further when the hurricane destroyed possessions, increased expenses and knocked them out of work.

Not far from Dimas in impoverished Immokalee, located on the edge of the Everglades, Haitian immigrant Woodchy Darius, a junior at Immokalee High School, must decide whether to return to class when school reopens or head to the fields to pick berries once the land is dry enough to work again.

“The rent is $375, and if I don’t have the money they’ll kick us out,” said Darius, 17. He lives in a grubby apartment building with bare concrete floors, burglar-proof doors and cinder-block walls that make it resemble a jail more than home.

The Census Bureau estimates about 3.3 million people live in poverty in Florida – nearly 16 percent of the state’s 20.6 million population. For them, the amusement parks of Orlando or President Donald Trump’s Mar-a-Lago Club in Palm Beach might as well be on Mars.

Many work by the hour in restaurants, gas stations, hotels, stores and other businesses forced to close for days after Irma, depriving them of paychecks. Others are day laborers or migrants who earn money by the pound picking produce that’s sold in stores nationwide. Still others are retirees on fixed incomes or disability checks whose budgets already were tight before Irma. 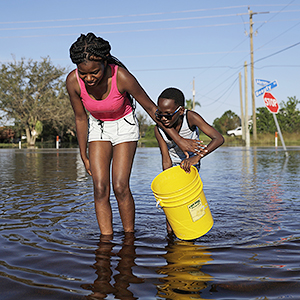 Fleeing Irma wasn’t an option for those who lacked transportation to get to a shelter, couldn’t afford gas to drive north and couldn’t rent a hotel room. The likely costs associated with cleaning up or finding a new place to live pushed them closer to the edge than ever.

After Irma, Gwen Bush scrambled to find a place just to sleep after flood waters rose around her home.

A security worker for Amway Center in Orlando, Bush hadn’t worked in the days leading up to Irma because concerts and other events had been canceled as the storm approached. It’s not certain when the arena will be open for business, and she was down to her final $10 before the storm.

“I’ve been through some hurricanes and some storms living here but I can say on my life this is the worst I’ve ever seen,” said Bush, 50, a lifelong resident of Orlando. “How do you recover from this, losing all of your stuff?”

David and Andrea Jewell survive on disability checks and live on a sailboat they bought for $1,000 on eBay years ago. David Jewell, 51, can’t imagine now living on land; both consider the ocean – like the dolphins they watch – their only real neighbors.

After the storm, the Jewells stayed on cots in the gym at a community center in Jacksonville. They tried to figure out if they could get a new boat if theirs was destroyed. Maybe, they decided, they could just cut back on food and find another cheap one with their next disability checks.

But in one bit of good news, they later learned from a friend that their boat is still floating.

For some poor people, there’s at least a little upside to the devastation.

Guatemalan immigrant Aura Gaspar totaled up storm-related expenses of about $600 while using a twig-fired grill to stew chicken on her front stoop in Immokalee; she has three school-age children to feed and a 2-week-old baby.

But Gaspar said husband Juan Francisco got a job cleaning up storm debris in the Fort Myers and Naples area. He needed to get busy, she said through a translator: Their storm preparations cost nearly twice as much as his weekly pay of $320.

“We had to prepare the house so it would protect us,” said Gaspar, 28.

Beside his ruined Immokalee mobile home, Dimas is trying to get back on his feet, but it’s tough.

Dimas earns a meager living cooking hamburgers and chicken in a food truck parked by his home, and some customers already have returned – he said he sold all 40 of the hamburgers that were still safe to cook Tuesday.

Dimas needs to replace the income from his rental trailer, already condemned after being split open by the wind. Dimas had used that money to help feed his two teenagers and pay for the rescue inhalers he needs for his asthma. Losing it will only make it harder for Dimas to do what he says is one of his favorite things – providing free or cut-rate food to those who have even less.

Coping with Irma’s aftermath is only making life tougher for people with little who live in places including unincorporated Immokalee, said Dimas.

“A lot of people work. They work hard here. They don’t ask for nothing. They just go to work, come home and something like this happens, it’s ….,” Dimas said. “I don’t know what to say.”

He stopped talking and turned away to keep from crying.