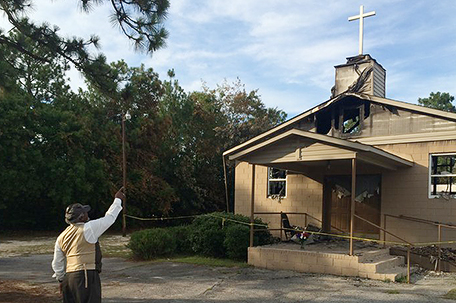 ABOVE PHOTO:  Pastor Bobby Jones points to the cross on top of Glover Grove Baptist Church, where he has preached for more than 30 years. The steeple was one of the only parts of the church left standing. (Will Huntsberry/NPR)

Glover Grove Baptist Church is nestled in a woody, quiet part of Warrenville, South Carolina, surrounded by trailer homes and old cars. The congregation is small, about 35 people according to local reports. You have to look hard online just to find a phone number or an address.

It is one of at least six black church burnings in the South, all of which have taken place in the week-and-a-half since nine people were killed in Emanuel AME Church.

Fires in Charlotte, North Carolina, and Knoxville, Tennessee, are both being investigated as arson. Authorities in Macon, Georgia, are investigating another there as “suspicious.” A fire at a Tallahasee, Florida, church was likely caused by electrical problems, authorities have said. Another in Gibson County, Tennessee, may have been caused by lightning. One burning in Charlotte is being investigated to determine if it could have been a hate crime.

Adonica Simpkins lives in a trailer home right next to Glover Grove Baptist Church. “I actually think it might be a hate crime,” she said, looking across a field to the church’s remains on a sticky, sunny South Carolina afternoon. “The way things are happening these days, you never can say. Look how they went up there and shot someone in the church, or other churches burning down. It’s just so much going on in the world. You never know.”

The burning actually woke Simpkins up that Friday morning, and she was one of the first to call 911, right before she walked down the road to the pastor’s house to make sure he saw it, too.

“You could actually feel the heat from the church,” she said. “The actual power lines, just started, pop, pop, pop! Then the power went off. It was terrible. You could see straight through the church, how it was burning.”

Another nearby resident, George Mack, said of the flames, “It was like standing inside of a volcano, with the lava flowing. It was so hot.”

The pastor of Glover Grove, Bobby Jones, walked around the charred building Sunday evening with NPR, pointing out everything that used to be.

“The pulpit, the highest place, that’s the pulpit,” he said as he gazed past the caution tape. “My office used to be right there. And it’s gone. All my robes, and everything, all my stuff is in that room right there, it’s gone.” He vacillated between tears and declarations of his faith as he spoke, assuring us, and perhaps himself as well, that everything would be okay. “When you see me crying,” he said, “it’s not sad. It’s joy. I just thank God for what he’s done, and what he’s going to do, and what he did in the past.”

Only two walls and the steeple still stood, with a large, unscathed white cross on top. The roof was gone. And just about all of the inside of Glover Grove Baptist Church was blackened and charred. Some things remained, covered in ash: the hollowed-out shell of a snare drum, a few chairs in the kitchen. You could still make out lyrics and notes on some pages of hymnals. Some church pews were still standing, but they were totally burnt as well.

When asked if he thinks the fire was a hate crime, Jones hedges. “I hope not. I hope from the bottom of my heart that it’s not. I’m 72 years old, and I’ve never had a problem out of anybody.”

When pushed, Jones says he doubts it was an electrical fire. He’s an electrician himself, and he says all of the equipment in the church was working fine before the fire. He thinks a person may very well have set the blaze. “If it’s a hate crime, it had to be somebody that’s not from here.”

Richard Cohen is the president of the Southern Poverty Law Center, and he says the recent burnings of black churches throughout the south are “very, very suspicious.”

“Black churches have long been the focus of civil rights activity,” Cohen told NPR. “And for this reason they’ve been targeted historically.”

There was a string of them in the 50s and the 60s, during the civil rights movement. Perhaps the most notorious was the bombing of the 16th Street Baptist Church in Birmingham, Alabama, on September 15, 1963, which killed four young black girls.

A wave of church burnings swept the nation again in the 90s, prompting then-President Bill Clinton to sign the Church Arson Prevention Act, a law that increased jail time for people who burn churches.

As to this recent wave of church burnings, Cohen said, “It’s not unreasonable to suspect that what we’re seeing [now] is a backlash to the taking down of the Confederate flag, the determination of our country to face its racial problems.”

Whatever the cause of the Glover Grove fire, Adonica Simpkins says she will still be afraid. We asked her what it’s like to be a black person in South Carolina.

Less than half a mile from the church and Simpkins’ home, a Confederate flag waves on a front porch.

State investigators told NPR on Sunday that they have not yet determined a cause in the Glover Grove Baptist Church fire. The Aiken County Sheriff’s department has turned over its investigation to the South Carolina Law Enforcement Division, and the FBI is investigating as well.

Jones is confident he’ll rebuild. But this kind of tragedy isn’t totally new to him.

“We had another church that burned down, over across the woods there,” he said. “That’s been, what, maybe 30, 32 years ago, no 34 years ago. I believe that was an arson.”

By Bruce Sith and Meg Kinnard

GREELEYVILLE, S.C.  — A fire that destroyed a black church that 20 years ago was a target of the Ku Klux Klan was not the work of an arsonist, a federal law enforcement official said Wednesday.

Greeleyville is a town of about 400 people around 50 miles north of Charleston, where a pastor and eight members of a historic black church were fatally shot June 17 in what authorities are investigating as a hate crime.

The fire – reported about 9 p.m. Tuesday as storms moved through the area – occurred as federal authorities also investigate a series of fires at black churches in several Southern states. So far, there is no indication the fires are related.

On Wednesday morning, only the brick walls of the Greeleyville church remained. The roof had collapsed, and the long windows no longer had glass in them. The side of the church facing the rural highway had a white cross that appeared charred.

Investigators walked through the debris, taking pictures and examining the remains of the building. Yellow crime scene tape kept reporters and nearby residents away from the building.

The Rev. Alice Parson Wright, a pastor at an AME church about 20 miles away, stopped by the scene of the fire Wednesday morning.

Wright, who has preached at Mount Zion and knows the congregation, said the church won’t be defeated. “The way they rebuilt before … I can’t see them doing anything else but rebuilding,” she said.

The image of orange flames coming from the same church the KKK burned down in June 1995 brought up painful memories, said Williamsburg County Councilman Eddie Woods Jr., who got out of bed Tuesday to drive to the church after hearing about the fire.

“That was a tough thing to see,” Woods said. “It is hurting those people again. But we’re going to rebuild.”

Two members of the Ku Klux Klan pleaded guilty to starting the 1995 fire and a second blaze at another predominantly black church.